In recent years, Latin America has experienced sustained economic and population growth. Due to this growth, energy demand in Latin American countries continues to rise and governments will need to develop a strategy to meet their energy needs in sustainable ways.

The World Bank and the International Energy Agency estimate that between 2011 and 2030 global energy demand will increase by 33 percent, renewable energy will meet 40 percent of this demand. In Latin America, the share of renewables in electricity generation in 2035 is estimated to be 71 percent (or 1,451 TWh) due overwhelmingly to the hydroelectric contribution of countries like Brazil. This forecast should be met with Latin America policies and infrastructure to meet energy demand that at the same time will protect their economies.

Although Latin America is a region abundant in renewable resources, it has failed to capture these resources efficiently as have regions like Europe.

Latin America’s offshore wind resource is abundant but lacking is a strategy to develop this marine energy resource in a sustainable manner.

Although there are Latin American countries that have taken advantage of their renewable resources in different ways–more than half of Uruguay’s energy is supplied from renewable resources—there is a technology that has not been fully considered: offshore wind. 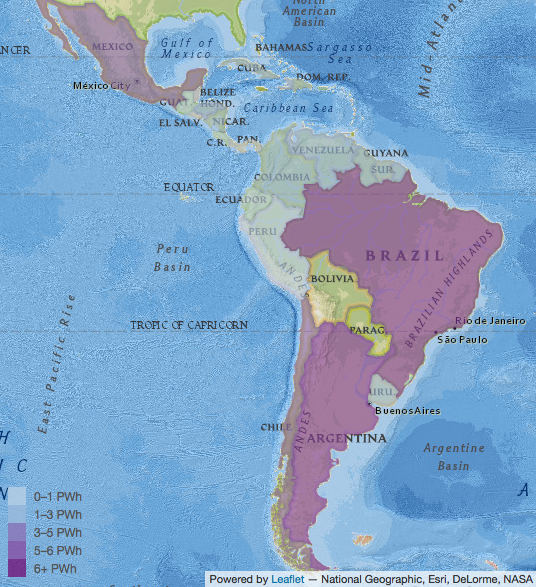 Offshore wind technology, already successful in Europe, generates more than 5 GW for the region in countries like England and Germany and has the potential to be an important component of the energy mix of Latin American countries.

Chile has great potential as an offshore wind resource, according to studies by researchers at the University of Chile. Although the Inter-American Development Bank conducted a study evaluating the potential of marine energy technologies along Chile’s coast, marine technology and wind power were not evaluated (1).
The study, which was conducted using NASA satellite data was divided into three zones according to their potential. Zone B, which begins north of Taltal and goes to the Bio Bio Region, make up the most densely populated region, and therefore, the majority of Chile’s electricity consumption.

Chile’s central coast (Zone B) has the strongest potential and possibility for the development of offshore wind energy in the country. Taking advantage of the proximity of the coast for this type of technology and energy avoids transmission costs due to the construction of generating plants in remote locations.

Although Chile, after Brazil, has the longest coastline in Latin America, its continental shelf has a width ranging from 3 to 60 kilometers at depths of between 200 and 300 meters (2). As these are very important factors in the decision of which type of foundation to anchor offshore wind turbines, Chile would be forced to use floating platforms that would result in significant costs in the final price of electricity from these facilities.

Brazil is experiencing growth in its offshore oil exploration. According to the state-owned oil company Petrobras, Brazil has some of the largest oil reserves in the world (3), and is expected to produce 4 million barrels per day by 2020 (4). Although Brazil plans to enter the offshore wind market with the construction of 12 MW in the state of Ceará, there is potential for the integration of offshore wind turbines to power oil platforms.

Oil rigs cause a great impact on the marine ecosystem, either through oil spills by human or operational error or by releasing diesel or gas from the generators that power these platforms. The integration of offshore wind energy to power oil platforms could help minimize these adverse effects.

A case in point is the prototype offshore wind project “Beatrice Wind Farm” in Scotland. The project, designed to study the impact and feasibility of offshore wind farms in deep water (6), at the same time supplied power to an oil rig. Numerous studies, mainly performed by Norwegian researchers, showed that the integration of offshore wind turbines into oil platforms showed a reduction in the costs of fuel, reduced CO2 and NOx emissions by up to 40 percent (7) and increased efficiency in electricity generators (8), resulting in a direct benefit to both the oil companies and the environment.

One aspect to be considered for possible integration of offshore wind turbines on platforms is that the locations where the new and oil reserves off the Brazilian coast are located are at depths of over 2,000 meters. These depths would force offshore wind installations to use floating structures for wind turbines. This is where the oil industry in Brazil can take advantage. Strategically integrating offshore wind technology has great potential in South America.

Other areas to be considered for the development of offshore wind energy would be Colombia, Puerto Rico and the Argentine Patagonia. In La Guajira in northern Colombia, residents have experienced a drought, sparking protests and riots in a region where some places have not seen rain for two years (9). In addition to La Guajira in Colombia, the Caribbean islands are also affected by drought, as is the case with Puerto Rico. In Puerto Rico, with half the land area of La Guajira and four times its population, the government has had to ration water service in some areas of the island.
A solution to help countries and regions experiencing droughts, as long as consumption centers are near the sea, is the production of potable water via desalination powered by offshore wind.

Puerto Rico, as with many islands, has the ideal conditions for the development of this application. High electricity costs result in the high cost of water supply despite the abundant availability of wind.

According to the International Renewable Energy Agency (IRENA), wind energy is the most feasible and promising resource for the desalination of sea water, especially in coastal areas with high wind resources. In its most recent publication “Water Desalination Using Renewable Energy: Technology Brief, 2012,” IRENA makes a comparison between cost and performance of different technologies and points out that the energy demand for seawater desalination by reverse osmosis with wind energy is approximately 4-5 kwh per cubic meter of desalinated water. Compared with technologies that are currently used commercially or technically viable scale, such as solar desalination and reverse osmosis with photovoltaics, reverse osmosis with wind energy has the greatest technical feasibility to produce drinking water on region’s most suitable: coastal areas and islands.

Considering these numbers, we could compare the study “Achievable Renewable Energy Targets for Puerto Rico’s Renewable Energy Portfolio Standard,” published by the University of Puerto Rico Mayagüez Campus (RUM) to make an estimate. According to the study, a turbine rotor 100 meters above the sea surface could generate between 4,759 and 10,680 MWh, which would mean producing daily between 2,608 and 5,852 cubic meters of drinking water (using a wind turbine to power at sea system reverse osmosis desalination.) You may already have an idea of what you could do with an offshore wind farm.

It is here, in coastal and offshore sites, where the wind resource is most constant and where wind is more predictable than onshore sites where the terrain and obstacles interfere and impact wind flow.

So far, Latin America has the momentum of a growing economy and also the interest of other countries in the world willing to invest in its economy. Growth of energy demand is unavoidable and Latin America must take action to develop wind technology on its shores. Latin America’s offshore wind resource is abundant but lacking is a strategy to develop this marine energy resource in a sustainable manner.

Luis Armando Pagan Quinones has professional experience in developing renewable energy and energy efficiency projects in Puerto Rico. He is currently pursuing a doctoral degree at the University of Massachusetts and is an active member of the IGERT Offshore Wind Energy Program. He is specializing in the production of drinking water by desalination systems using offshore wind power.

(5) Lula field could turn Brazil into an oil superpower: