by Mariah Quintanilla and Holly Kane
May 5, 2017

Angel Gonzalez meandered up the vine-covered hill and looked out over Puerto Rico’s El Yunque National Forest. He stopped halfway up the slope to point out the acacia trees in the highest corner of his farm, decorated with large brown seed pods. He wore a yellow baseball cap and a pale-green shirt with a colorful cartoon graphic in the center saying, “What does labor want?”

He continued uphill and passed a young avocado tree, as well as a row of healthy tomato plants growing in a mound of soil that traversed the hill. Gonzalez is not sure if the avocado tree will ever bear fruit, but he’s hopeful. His greying beard wrapped around his chin like a strap and his faded blue jeans were torn and splattered with paint. Mango trees grow sporadically among rows of banana plants and papaya trees.

Gonzalez owns a half-acre garden in Loquillo, Puerto Rico called Finca P’achi Coquí Loquillo. He grows everything from cucumber to nopal, commonly known as prickly pear cactus, prized for its medicinal qualities. He retired from his job as a middle school teacher in the Bronx in 2008 and left New York City about two years ago. Now that he has started his own garden, he has taught himself the essentials of sustainable agriculture, such as composting and agroecology. Gonzalez is not alone: He is part of a growing number of Puerto Ricans practicing sustainable farming as a means of establishing food sovereignty. Growing one’s own food has become increasingly important for an island besieged by a debt crisis with no end in sight. 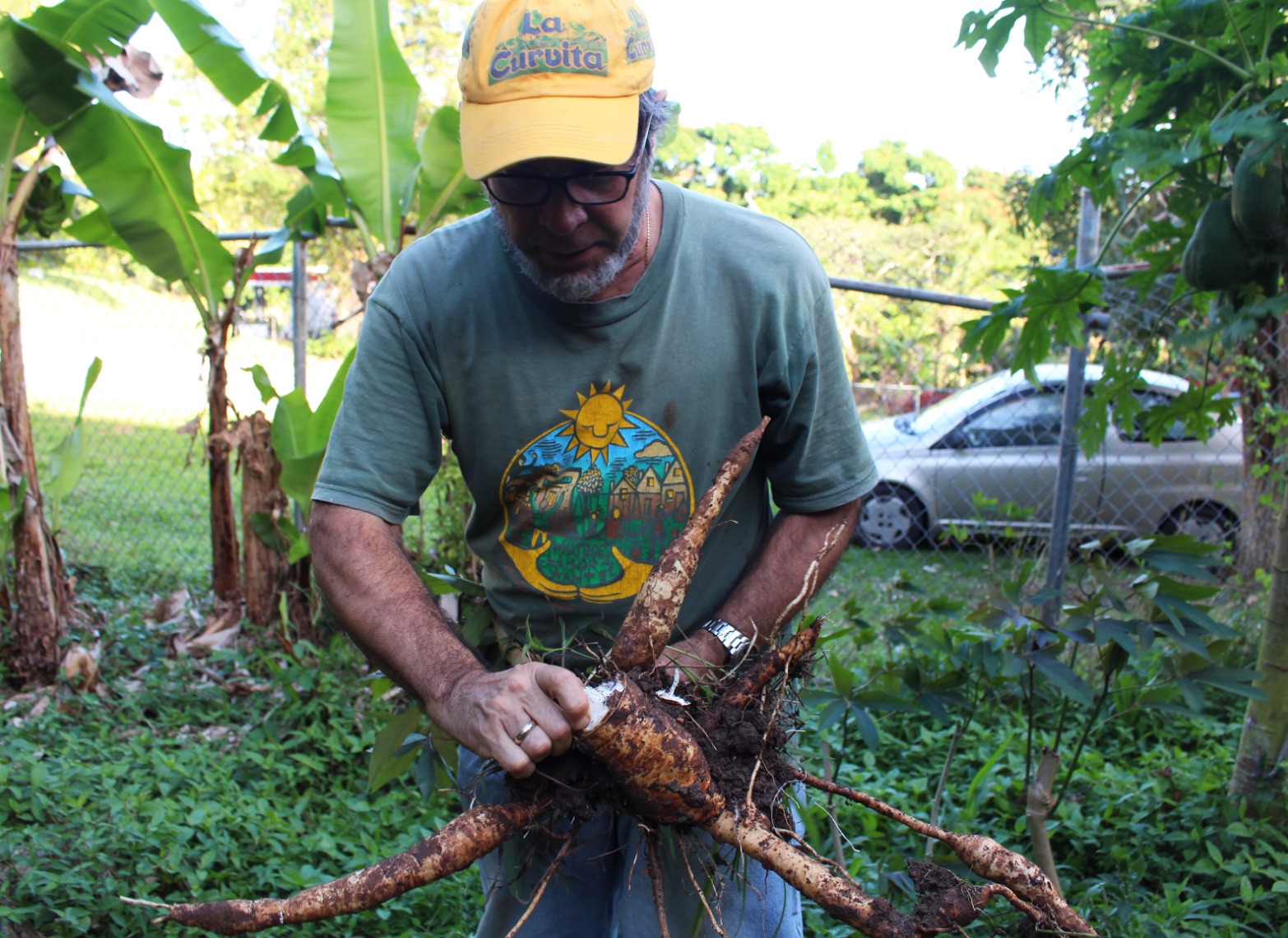 Gonzalez unearths a large yucca root, which is a staple in Puerto Rican cuisine because it grows wild on the island.

Gonzalez’s patio table was covered with a bushel of green and yellow bananas, a broken stalk of sugar cane, and a green papaya the size of a volleyball. His friend Zaida Robles lounged in a hammock there, sipping homemade lemonade squeezed from limones criollos, a sour citrus fruit that tastes more like lime. Robles is also retired. In her free time, she studies permaculture—a type of farming informed by the natural structure of an ecosystem and its existing vegetation. She often helps Gonzalez with his farm.

While Puerto Rico’s fertile soil and tropical climate are ideal for growing food, around 85 percent of the island’s food is currently imported from mainland United States. As a result, fresh produce is relatively hard to find and, consequently, very expensive, especially for the many Puerto Ricans who are unemployed or scraping by at low-wage jobs or in the informal economy. At 12 percent, the unemployment rate is much higher than most of the U.S. In 2015, Puerto Rico’s median household income was $18,626, compared to $55,775 in the U.S.

The lack of fresh produce is a long time coming. The shortage is a result of urbanization and industrialization that took place during the 1940s and 50s in response to World War II. Operation Bootstrap, a group of projects launched in 1942 by the United States to invest in and transform the island’s economy, encouraged agricultural workers to move to cities to bolster the manufacturing sector. As a result, the fields emptied and crops became scarce.

But farmers like Gonzalez are determined to turn that around. The lack of fresh food has inspired grassroots farming efforts to promote sustainable food production on the island. Like Gonzalez, Tara Rodríguez Besosa moved back to Puerto Rico after living in New York City to start farming.

“We are not sovereign in our decisions”

Besosa is 33 years old and owns one of Gonzalez’s favorite restaurants, El Departamento de la Comida, in San Juan. El Departamento is a farm-to-table restaurant that serves healthy meals using ingredients from nearby community gardens. It is a hub for locally-grown produce as well. People can pick up boxes of pre-ordered produce which her sister delivers from nearby farmers.

Her restaurant and its “Do-It-Yourself” community garden are within walking distance of a local skate park, which makes the restaurant an ideal outlet for food-centered education aimed at young Puerto Ricans. Oregano brujo, which grows wild on the island, can be used to make a traditionally non-Puerto Rican sauce, Besosa tells students. “It grows like wild, and a lot of people don’t know what to do because it grows so fast,” she says. “I teach people how to make pesto with it.” 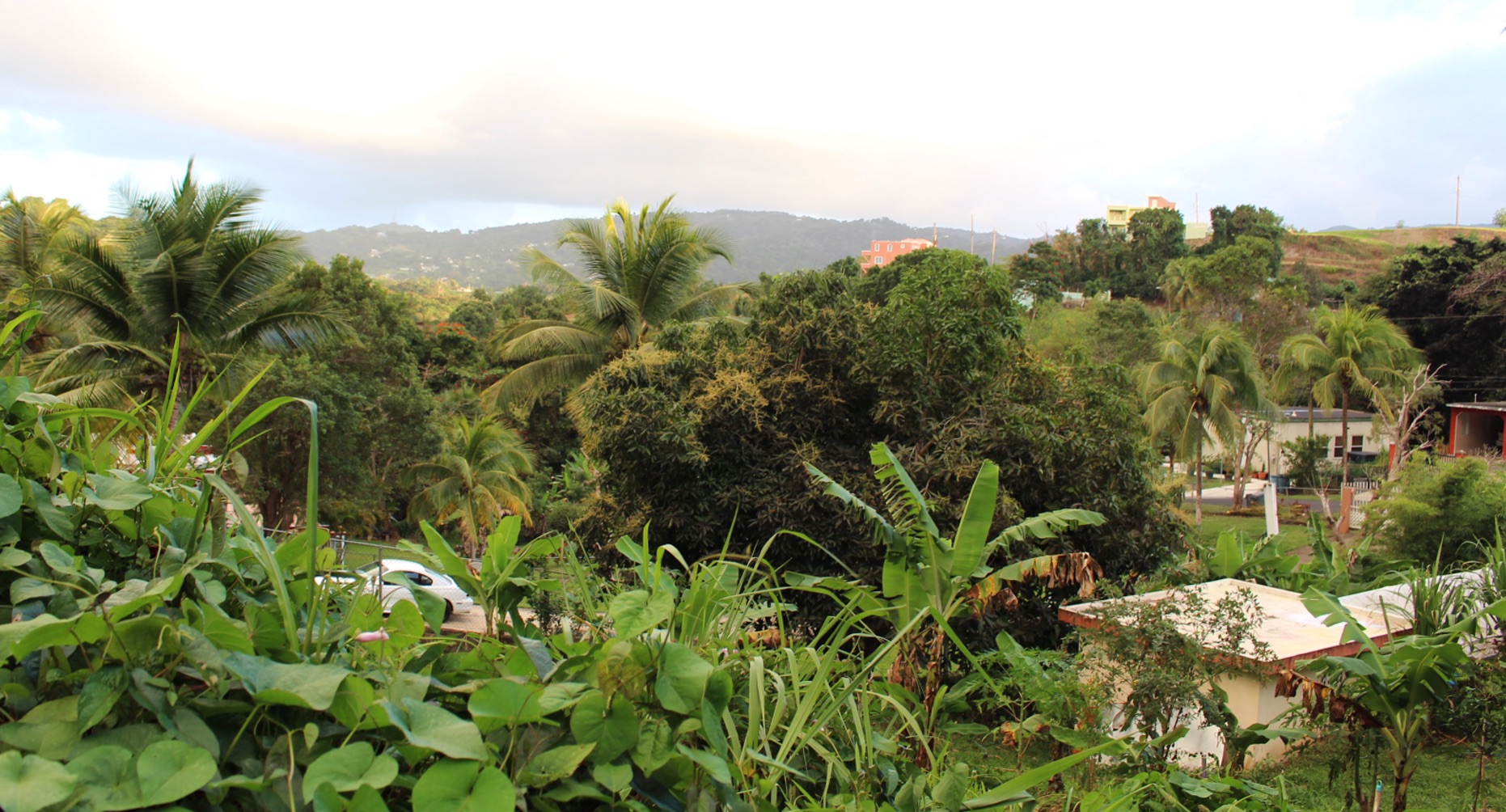 The vew from the top of Finca P’achi Coquí.

Gonzalez has not yet converted his garden into a community project, but he trades his produce with community members at a new bi-weekly market in Loquillo called La Feria Agrícola y Artesanal de Luquillo. At the market, locals come together to share fresh produce, cook food and sell their art. Community-based programs like these are a good starting point for Puerto Ricans, says Georges Felix, a Puerto Rican agronomist currently studying and teaching sustainable agriculture in Burkina Faso. Felix is a member of Organización Boricua, a non-profit organization that promotes environmental and food sustainability on the island. He says that Puerto Rico’s political status as a U.S. Commonwealth makes it hard to change the situation because, without voting power in Congress, the island has little control over the food market.

“We are not sovereign in our decisions,” says Felix. Regulations established in the Jones Act of 1917 dramatically increased the price of goods, including imported fresh produce, on the island. It dictated that all items shipped to or from the island must be transported on American vessels, meaning much higher costs passed onto consumers. 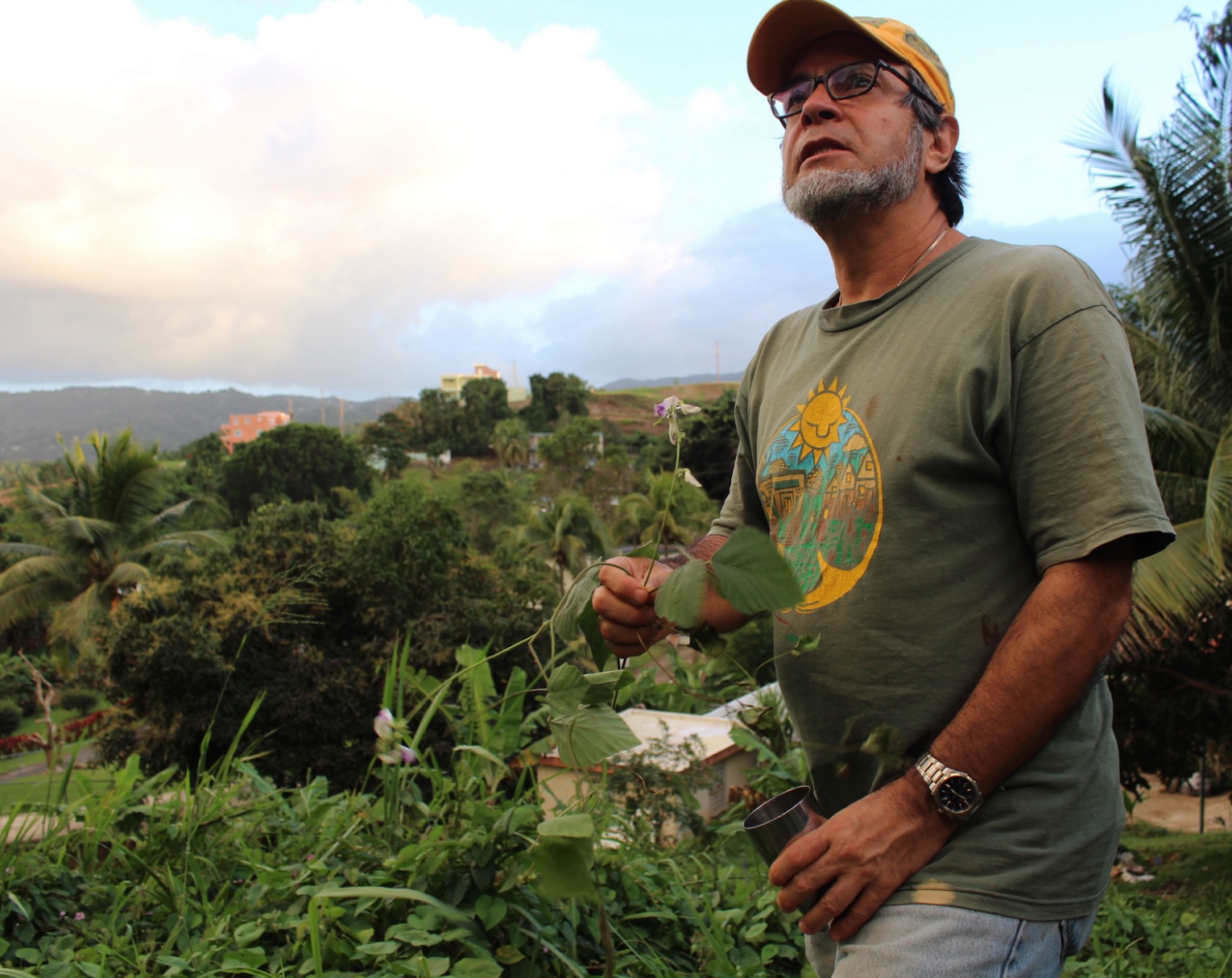 Gonzalez understands that most Puerto Ricans living on the island don’t have the time or resources to grow their own food.

Gonzalez echoes Felix’s concerns. It would be relatively easy to get a grant from the U.S. government to grow a single crop and use government-certified pesticides, Gonzalez says. But it’s harder to find a program that will support more sustainable methods of farming, such as planting mixed crops among aromatic plants, and fostering healthy soil through composting.

“With soil, the concept is that it’s alive and you got to protect it. It’s the skin of the earth. It has bacteria and fungi, and all that good stuff that’s important to organic farmers,” Gonzalez says. Over the years, he has taught himself the fundamentals of agroecology through books and trial and error on his Finca. Though he’s a relative newcomer to sustainable farming, Gonzalez says science has always been a source of inspiration.

Gonzalez spent his childhood in the projects in the Lower East Side of Manhattan with his eight siblings. Driven by an insatiable curiosity and his love for science, he found ways to explore the natural world even in that concrete jungle. Sometimes his father would bring home plants he found growing wild in the city and Gonzalez would replant them in small containers at home. One time his father brought home a raw peanut, and he tried to make it sprout. “These were my own little experiments,” he said. If they didn’t grow, he would research them in the encyclopedia. When the peanut failed to sprout, he did some research and discovered peanuts are in fact a form of fruit.

As a kid growing up poor in the projects, he had few educational resources at his disposal. He said he learned the most through experimentation with the things around him. When he became a teacher, he utilized this inquiry-based learning as a method for teaching his own students.

Gonzalez would lead the kids on field trips into the Bronx’s vacant, overgrown lots, where pieces of the natural world would emerge through the loose bricks and he would tell them to look for bugs. “They hardly had a sustainable budget for the kids,” he said, so he would make the best of what nature could be found in New York City. 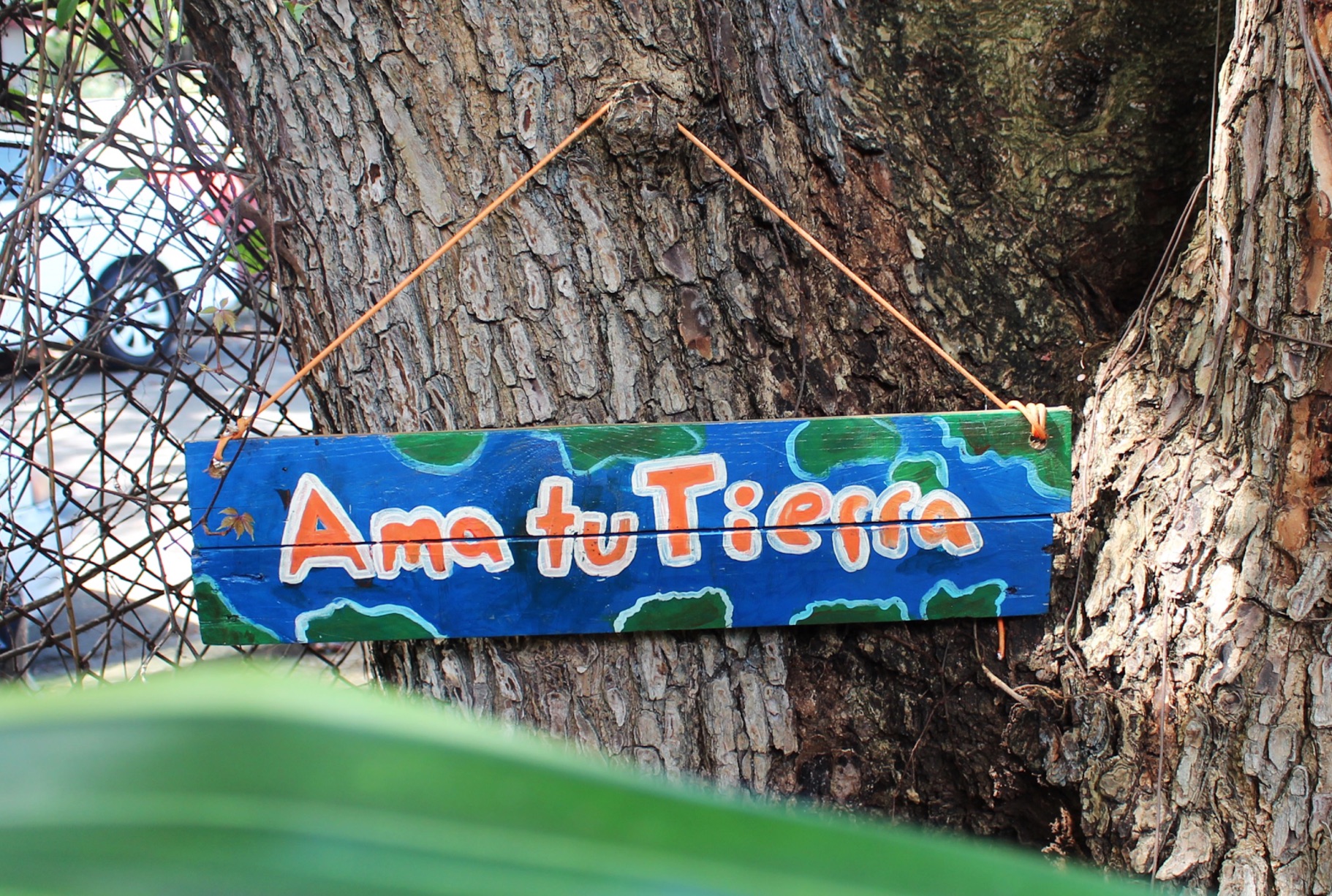 The words “ama tu tierra,” or “love your land,” are painted on a sign near the entrance of Bucare Urban Garden. The garden was started by community members in an abandoned lot just down the road from Besosa’s El Departamento de la Comida.

It seems Finca P’achi Coquí may be a way for Gonzalez to return to his roots. He and Robles knelt by a thin green plant that stood about 2 feet tall. Together they dug a hole around the base of the plant with their hands, and unearthed a large yucca root. It was covered with dirt, and branched out in at least five directions. The thickest part of the root was about the size of a forearm.

“[Yucca] comes from our ancestors. They’re easy to plant too,” says Gonzalez. You simply break off a piece of the root, and bury it in the ground so it will sprout another plant. Robles says she uses the roots to make pasteles—a fried patty with shredded yucca root and a variety of meats. The Taínos, native Puerto Ricans, also cultivated yucca to make casaba, a kind of bread cracker.

It is easy to romanticize the work of small Puerto Rican farmers like Gonzalez and Besosa. For most Puerto Ricans, however, it is incredibly difficult to make a living growing food. Farming is still stigmatized as a poor man’s profession and older generations caution young people about becoming farmers. Not long ago, it was a dying profession. Felix, the agronomist with Organización Boricua, is careful to not oversell the current food situation on the island. But the produce they’re growing is meeting a real need. The reality is that fresh produce from farmer’s markets is still unaffordable for most Puerto Ricans, says Felix, who is hopeful that with enough community-based programs such as El Departamento de la Comida, the island will eventually establish a sustainable food production system.

“With soil, the concept is that it’s alive and you got to protect it. It’s the skin of the earth.”

Many more young Puerto Ricans are looking toward sustainable farming as a profession. But the island is steeped in an economic crisis, crippled by debt. As universities and high schools continue to close due to lack of funding, the future of agroecology programs on the island is especially uncertain. Robles says her son is planning to enter an agriculture program at the University of Puerto Rico, Utuado, the youngest of 11 campuses in the University of Puerto Rico system located in the center of the island. But in the wake of the debt crisis, she worries that the school will close soon.

As darkness fell on the farm, the coquís, small native frogs about 1 or 2 inches long, began to chirp. A Puerto Rican flag hung on the wall by the door. Nearby, draped in front of a yellow generator the size of a golf cart, hung another flag depicting a giant tomato and emblazoned with the words “Cook Organic, Not the Planet.”

Gonzalez believes it’s critical that community-based agriculture gain momentum on the island. “It’s a matter of life, you know,” he says. “Besides getting the rewards of growing stuff, you are also providing for your country.”