A rare red rain-frog stares down extinction in the Ecuadorian highlands.

A few years ago, during a field expedition into the cold Andean highlands of the Cajas Massif in southern Ecuador, my brother Juan Carlos and other researchers from the Universidad del Azuay discovered a stunning red frog. The species turned out to be unique to this high mountain ecosystem and its coloring unprecedented – its closest kin, which are usually smaller, generally exhibit camouflaging or “cryptic” brown colors. The frog is also exceedingly rare. Despite several trips to this massif, Juan Carlos and his team could only find this frog in a single locality.

El Cajas Massif is a partially explored and poorly known region that in 2013 was declared a Biosphere Reserve by UNESCO. That’s about the time Juan Carlos and his team of young herpetologists began organizing expeditions to the massif to a patchy habitat between 3,000 and 4,000 meters. 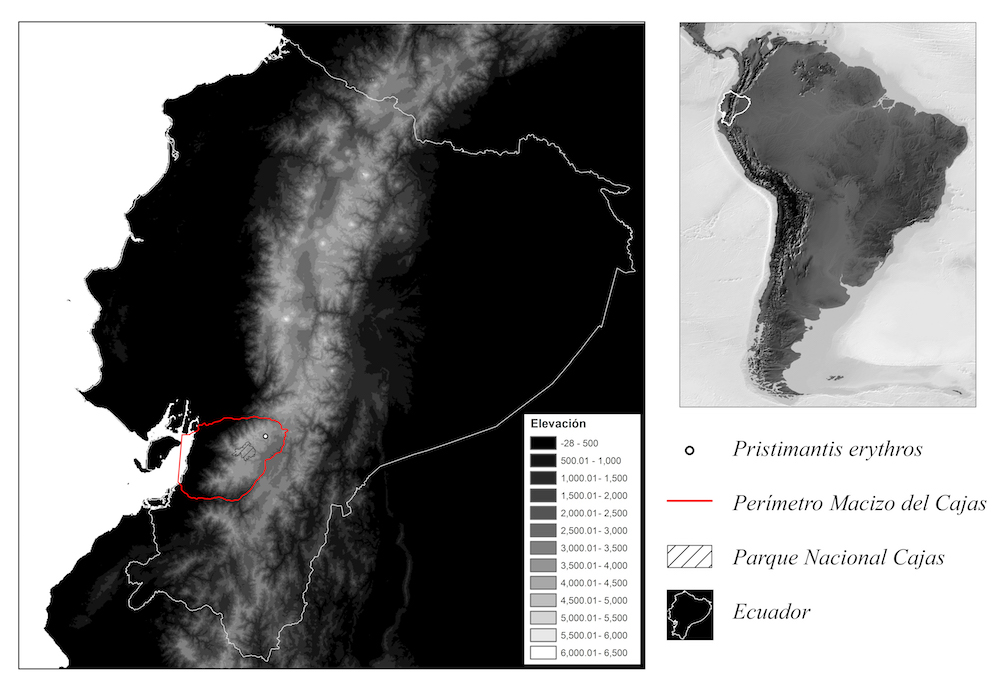 A map of where the frog was found.

In 2014, this rare red rain-frog was captured. When the physical and genetic analyses were completed, it was determined that the frog belonged to the Pristimantis group, a Greek name apparently meaning “Arboreal Frogs from the Sierra.” In English, they are named “rain-frogs.” One particularity of the rain-frog is that they do not have a larval stage – meaning they are never tadpoles. When new rain-frogs come into this world they are just teeny-tiny versions of their parents. This is an advantage – it can survive independent of a body of water.

Rain-frogs are also keenly suited to Ecuador’s cold, montane habitat – an unforgiving landscape of mountains and high-altitude forests and paramos.

But the isolated habitat and limited distribution of this species of red amphibian may turn out to be bad news for this new rain-frog, perhaps placing it on the IUCN list of critically endangered species. Though the Cajas massif includes a national park, the rain-frog was found in the extreme northeastern paramos of this region, an area lacking official protection. That means this already rare frog may be staring down extinction.

Based on its vibrant crimson color, this new Ecuadorian rain-frog was named the Blood Rain-Frog (Pristimantis erythros) and its discovery was recently published in the open-access journal ZooKeys. This discovery congregated herpetologists from different Ecuadorian institutions including the Universidad del Azuay and Universidad San Francisco, and the Instituto Nacional de la Biodiversidad. The cross-institutional collaboration aims to increase the interest and the protection of the rain-frog as well as the fragmented and isolated ecosystems on El Cajas Massif where it was found.