Brazil is the world’s largest consumer of pesticides. But how dangerous are they to Brazilians?

A new study out in the journal Chemosphere implies that pesticides are carcinogenic to Brazilians by showing a positive correlation between pesticide sales and colon cancer mortality rates in the country. But the authors – who hail from University of São Paulo, Ribeirão Preto, the U.K.’s University of Central Lancashire, and Germany’s University of Wuerzburg – stop short of blaming the chemicals for the rise in cancers.

“We do not claim to have found that pesticides cause [colon cancer] mortality in Brazil,” they write, pointing out that colon cancer could be caused by a wide range of things including high meat consumption and exposure to asbestos. Their overall conclusion? More research into pesticide exposure is needed.

One important trend they highlight – that’s less hazy than the sales/cancer correlation – is just how quickly farmland, and thus pesticide use, is expanding in Brazil. Take soybeans, Brazil’s most popular crop by a long shot.

While soybeans have been booming in the flat southwestern Brazilian states of Mato Grosso, Rio Grande do Sul and Paraná, rainforest and savanna in other states are now being cleared to make more room for the crop. 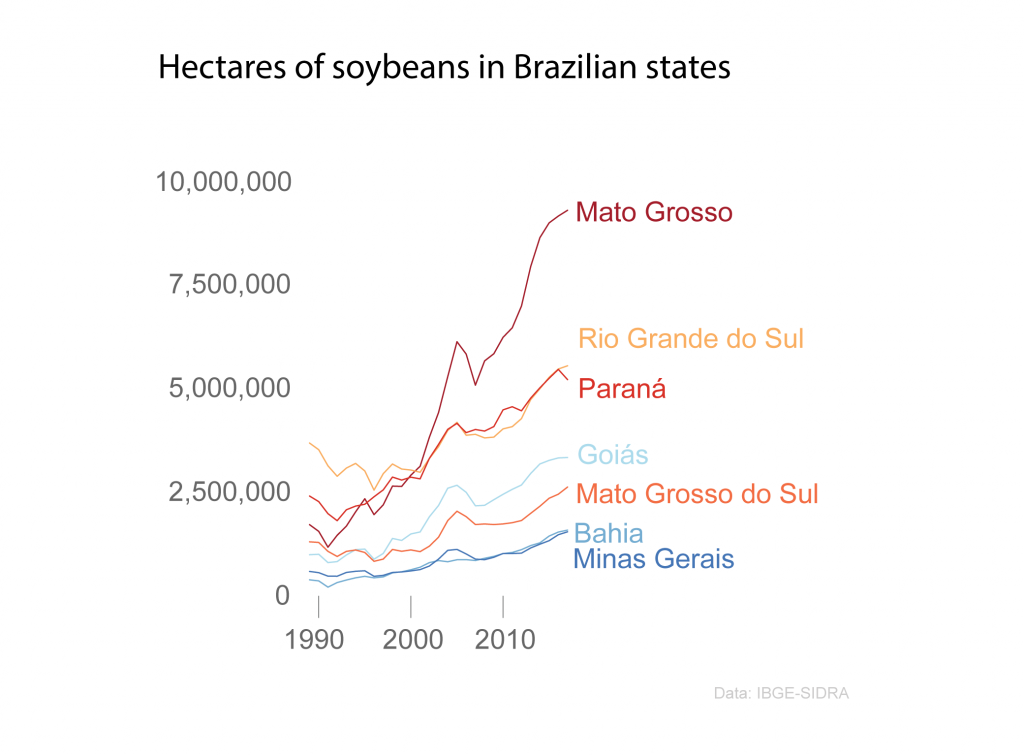 Take the northern state of Amapá, for instance, which is mostly rainforest but whose savannas are now being cleared for farmland at an impressive rate.

In fact, the area under cultivation for soybeans in Amapá has grown over 300% since 2013, from 4,550 to 19,050 hectares, according to Brazil’s agricultural census database SIDRA.

That’s the fastest rate of any Brazilian state. Now that the state’s savannas have been re-zoned for agricultural purposes, scientists and activists are worried about continued encroachment by soybean farms. The debate contrasts the immediate effects of deforestation with the long-term ones of pesticide exposure.