An avian flu epidemic in Mexico, the ongoing cholera outbreak in Cuba and genetically-modified mosquitos to be released in Brazil

Argentina is planning on building a 173 square mile wind farm in Chubut province, Patagonia. The China Development Bank Corp. has offered a $3 billion loan to Generadora Eolica Argentina del Sur (Geassa) for the 1,350 megawatt installation, which will feature Chinese-made turbines. The wind farm is projected to provide 4% of Argentina’s energy needs.

Scientists in Argentina have shown that noise exposure at early stages of development in rats can affect the brain’s hippocampus and result in behavioral changes, in addition to damaging auditory structures. The results were published by University of Buenos Aires scientists in the journal Brain Research. 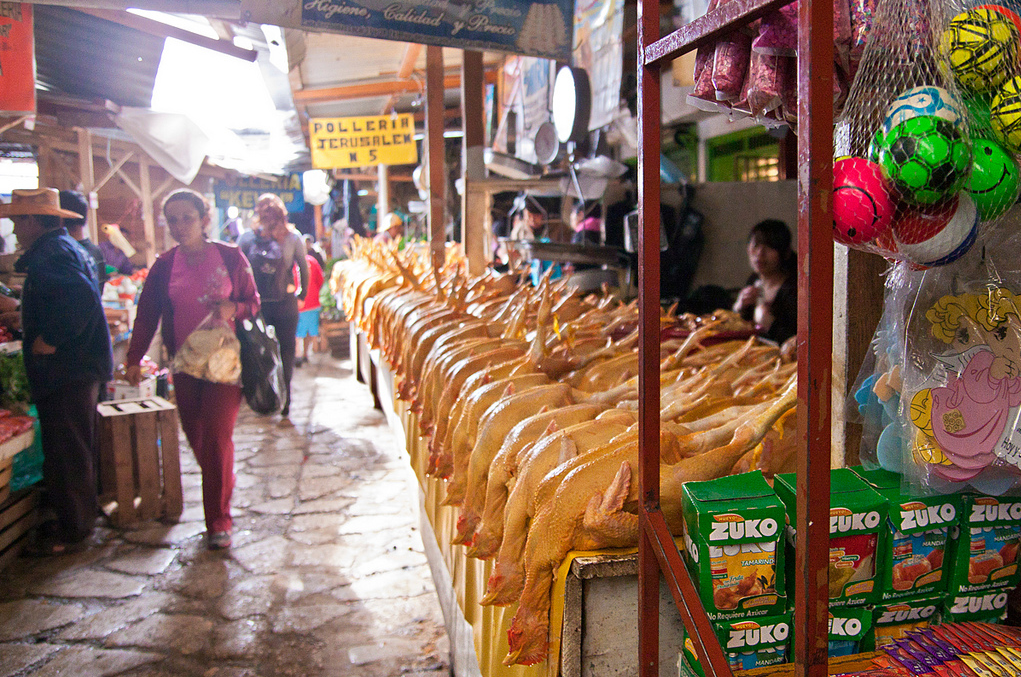 Mexico is in the midst of combating an avian flu epidemic. Credit: jbarcena via Flickr.

In the fight against dengue, a viral disease that infected 500,000 Brazilians this year, Brazil has announced it will breed huge numbers of genetically modified mosquitos. The modified Aedes aegypti mosquitos will be produced in the Brazilian state of Bahia. They will be males and when they’ve bred with females in the wild their offspring won’t reach adulthood.

Puma populations in Chile have rebounded since their federal protection began in 1996. Studies by Leonel Sierralta at Chile’s Ministry of the Environment have shown that pumas diets consist of 92% wild guanaco (a relative of the llama) and 2% sheep, laying to rest the myth that pumas primarily hunt and kill livestock.

Humbolt penguin populations on Pajaro Nino Island in Chile are being threatened by invading rats. Chilean scientists are studying the alien rats that are ravaging penguin nests and eating eggs at an alarming rate, as compared to seagulls. Humboldt penguin populations have dropped from hundreds of thousands to below 45,000, says Alejandro Simeone, who published a study on the rat invasion in the Journal of Ornithology. The Associated Press took a trip to the island.

The Cuban cholera epidemic has killed 15 people mostly in southeastern Granma province, according to the Miami Herald. Reports of more than 1,000 cases have been stifled by health officials and apparently security guards have been posted at hospitals to quell the news. Doctors are allegedly reporting the deaths as “acute respiratory insufficiency” instead of cholera on death certificates. Havana lies on the opposite end of the island of Cuba.

The last six weeks have been particularly sunny and dry in Colombia’s coffee growing region. These are ideal conditions for coffee plants, the Huila province coffee growers’ committee said. They are forecasting a large 2013 harvest, which could produce 9 million 60 kilogram bags of coffee. Rainy conditions brought on by La Niña lowered 2011’s production to 7.8 million bags. Historically, Colombia has produced around 11 million bags of coffee annually.

Twenty-two percent of Latin American women of reproductive age do not have access to reproductive health services, birth control and family planning methods, says Marcela Suazo of the United Nations Population Fund (UNFPA). Universal access to sexual and reproductive health is “still far from reality in most countries in the region.” After Subsaharan Africa, Latin America and the Caribbean have the second-highest adolescent pregnancy rate in the world with 73 pregnancies per 1,000 women between the ages of 15 and 19.

An avian flu epidemic in Mexico has prompted the slaughter of 2.5 million poultry over the last three weeks. To contain the outbreak of the H7N3 strain of avian flu, 1 million doses of vaccine from China will be used to inoculate poultry at the 29 farms so far affected, reports the National Union of Poultry Farmers (UNA). 7 million doses more will be shipped over in the coming weeks, said UNA. Over 3 million birds are affected in Jalisco state in western Mexico, announced the Ministry of Agriculture and Livestock.

Hundreds if not thousands of leatherback turtle eggs and hatchlings were crushed inadvertently on a beach in Trinidad by bulldozers working on a river diverion project. Conservation groups estimate up to 20,000 turtles were killed while Trinidad’s Environmental Management Authority claimed no more than a few hundred hatchlings were lost.