Colombia prepares for drought from El Niño, the U.S. and Mexico sign a border environmental agreement, and Brazil teams up with China on agricultural research.

China has opened a virtual laboratory in Brazil that will focus on molecular biology and genetics in agricultural research. Chinese researchers visiting Brazil will be facilitated by infrastructure already in place at Brazil’s Agrilivestock Research Company (Embrapa). Embrapa’s president, Pedro Arraes, outlined Brazil’s priority—to characterize and evaluate the genetics of the country’s agricultural products. Embrapa currently has virtual labs in the United States, France, Holland, the United Kingdom and South Korea. According to the USDA, Brazil’s crop area covers 62 million hectares, about the size of France. 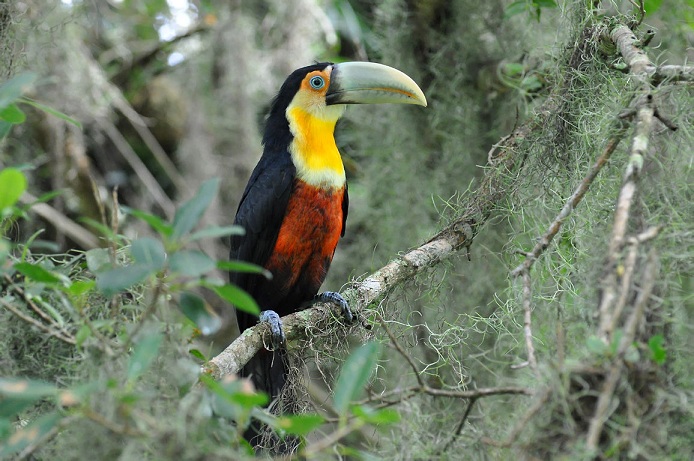 Paraguay’s Mbaracayú reserve is home to five species of toucan, including the red-breasted toucan. Credit: Claudio Timm via Flickr.

“Please Colombians, let’s save water because it’s possible that El Niño is coming,” said Colombia’s President Juan Manuel Santos following a federal announcement that there is an 80% chance Colombia will see the effects of El Nino this year. Authorities are outlining strategies for mitigating against the droughts that are being predicted to accompany the cyclical climate phenomenon that brings flooding and drought to different parts of the world. Colombian officials are asking citizens to ration water, avoid starting forest fires, sow quick-growing seeds, and protect themselves from solar radiation. The director of Colombia’s national institute of hydrology, meteorology and environmental studies (IDEAM), Ricardo Lozano, has said that the possibility of the country confronting the climatic phenomenon has increased to 81%. In response to the announcement, the Colombian Association of Environmental and Sanitary Engineering (Acodal) has emphasized Colombia’s need to create a national water agency.

Scientists in Colombia have found that the bacteria causing hospital-acquired infections in Bogota have actually been three species of Acinetobacter. The multi-drug resistant bugs were characterized as Acinetobacter baumannii, Acinetobacter nosocomialis and Acinetobacter pittii. The researchers have launched a comparison of the Colombian bacterial strains with others worldwide and are also looking for the genes responsible for the bugs’ resistance to antibiotics.

Mexico and the United States have signed an environmental program agreement which will address public health problems along with environmental issues in the region along the 2,000 mile border. Dubbed Border 2020, the program will work to reduce air pollution and encourage anti-idling technologies at ports-of-entry, improve access to clean water, and promote better waste management.

A new irrigation system is being installed in parts of remote Mexico by the Center for the Integral Development of the Campesinos of the Mixteca Alta (CEDICAM). The initiative uses a combination of pre-colonial farming practices and a modern understanding of the environment and sustainability to bring productivity back to fertile land. Desertification and industrial chemical-based agriculture are transforming Central and South America. According to the United Nations, 50 million people across Latin America could be displaced in the next few decades as a result of desertification.

A Mexican researcher is using an organic polymer to develop artificial muscles. The polymer has significant electrical conductivity, said Martha Aguilar Martinez, likening it to metal and semiconductor materials. She explained how the material could be used as a base for a replacement limb and be capable of communicating with the brain.

UPDATE: The number of birds slaughtered in Mexico has reached 8 million following a H7N3 bird flu outbreak first detected in June. The first phase of vaccination is underway with 80 million birds being immunized.

The World Wildlife Fund and environmental group ‘A Todo Pulmon‘ (With Every Lung) have asked the Paraguayan government to declare a swath of eastern Paraguay an ‘ecological corridor.’ The objective is to unite the Mbaracayú and Morombí forest reserves with a protected spit of land that will further ensure the conservation of the much diminished interior Atlantic forest—a habitat for several endangered and threatened species that has been reduced to 7% of its original extent. The Paraguayan government intends to distribute pieces of the land as part of its agrarian reform plan.