Poisoning rats in the Galapagos Islands, looking for natural antibiotics in Patagonian frogs and dengue fever in Peru.

Scientists in Patagonia are looking at the compounds frogs and toads secrete for antifungal, antibacterial and antiviral properties. With the mounting antibiotic arms race against drug-resistant ‘super’ bacteria, scientists are looking for natural sources of antimicrobials to combat bugs like MRSA and E. coli. “Every day bacteria are increasingly resistant because of the misuse of antibiotics and over generations these bacteria become more resistant until the antibiotic is ineffective,” Mariela Marani of the Centro Nacional Patagonico told the BBC. 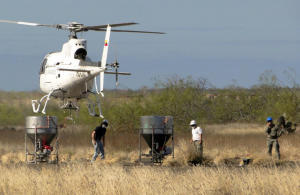 Authorities in the Galapagos are releasing 22 tons of poison to kill off invasive rats on the islands. Credit: Galapagos National Park.

Chilean scientists have developed a natural fungicide they want to apply to wine grapes to combat a fungus that causes botrytis bunch rot, a grey mold caused by Botrytis cinerea. The researchers isolated antifungal phenol compounds from winemaking’s byproducts. They hope to help the industry avoid using synthetic fungicides. The group was one of several that won an IDea award from Chile’s Science and Technology Development Fund (Fondef).

Authorities in the Galapagos are dropping close to 22 tons of poison by helicopter in an effort to kill off hundreds of millions of invasive rats that have taken over the archipelago, a UNESCO world heritage site. The rats feed on the native species on the Galapagos, some which are not found anywhere else in the world.

Researchers in Mexico will select five geothermal zones in Baja California and study their capacity as resources for renewable energy, announced the Universidad Nacional Autonoma de Mexico. Geothermal energy could help power desalination plants and off-the-grid communities in the region, objectives that are part of UNAM’s IMPULSA program.

A Maya grave with 47 skeletons has been found near the beach resort of Cancun in Mexico. Thirty of the skeletons belong to children under the age of six and appear to have suffered from malnutrition and acute anemia and were buried with modest offerings, reports Mexico’s National Institute of Anthropology and History (INAH). INAH archaeologists estimate that these Mayans lived between 1200 and 1550, a time marked by famine and crisis and the conquest by the Spaniards.

With rising temperatures and rainfall, Paraguay is facing rising cases of dengue fever. There have been more than 800 cases reported in children between the ages of 5 and 14. Last week, Paraguay’s health minister warned that the country would face a ‘great epidemic’ if citizens didn’t help eliminate the standing water that is a breeding ground for dengue-carrying mosquitoes.

More than 1,000 cases of dengue have been reported in the rainforested region of Ucayali, Peru, close to the border with Brazil. With the death toll reaching seven, regional governor Jorge Velasquez Portocarrero announced that a lack of resources was holding back how the region was combating the epidemic. On Monday, Velasquez described the virus: “This is not the dengue we had 20 years ago, it has genetically evolved, it’s more aggressive.” In fact, different subtypes of the virus are associated with differences in severity of dengue.