Global demand for quinoa triples its price in Bolivia, Paraguay struggles to contain spread of dengue, and the superears of a Colombian grasshopper.

Global demand for quinoa has tripled the price of the Andean grain, forcing Bolivian and Peruvian farmers to rely on other staples for food. “It’s worth more to [the producers] to sell it or trade it for pasta and rice. As a result, they’re not eating it any more,” a La Paz quinoa farming collective director Daysi Munoz told The Guardian. 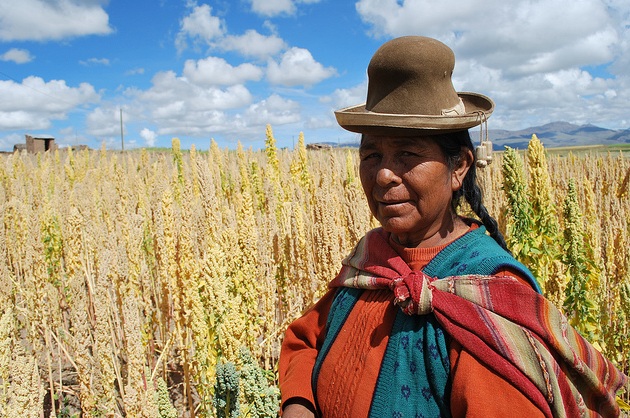 Demand for quinoa worldwide has tripled prices in Bolivia and Peru. Credit: Biodiversity International via Flickr.

A Colombian scientist has identified a hearing organ in a species of South American grasshopper that could shed light on super-sensory hearing. Fernando Montealegre has found a new structure in the grasshopper that is similar to a human ear—where airborne vibrations are transmitted to fluid. Unlike mammals who hear between 50 and 20,000 Hz, the katydid Copiphora gorgonensis—endemic to Colombia’s Gongora National Park—can detect frequencies up to 150,000 Hertz.

Cuba’s public health ministry has confirmed reports that 51 cases of cholera have hit Havana. Last August, a cholera outbreak in the island’s province of Granma affected 417 people and killed three.

Mexico has announced it will boost science and technology investment across the country, strengthen the national research funding agency CONACYT, and increase the number of scientists. Though a 2002 law stipulated science funding should be 1% of GDP, funding is currently at 0.4% of GDP. Any increase in funding will have to pass through parliament.

A NGO in Mexico City has launched a campaign to alert citizens of the effects of air pollution. In Mexico, airborne contaminants are the cause of 14,700 deaths per year, according to the World Health Organization, points out Gerardo Moncada, coordinator of the organization Poder del Consumidor (Power of the Consumer). The NGO has taken to the streets to promote awareness of the health impacts of ozone, carbon monoxide, sulfur dioxide, and other pollutants.

Paraguay has admitted defeat in its fight with dengue. The country has declared a national emergency alert to the entire nation. The rainy season has caused the population of the dengue-carrying mosquito to explode, as it breeds in stagnant water. Last year, 70 people died in Paraguay from dengue.

A penguin breeding facility in Peru has succeeded in mating two Humboldt penguins in captivity.