Cultivated in the Andean highlands since 3000 B.C., quinoa is making waves in the global marketplace. With global demand for quinoa rising, countries like Bolivia are stressed to meet the rush. Bolivia is now producing 40 times as much quinoa as it did in 2000. But there are physical limits to quinoa’s growth. Last week, Bolivian President Evo Morales chastised farmers for planting quinoa in fields where llamas–who provide essential fertilizer–traditionally graze. Related reading: the World Bank recently published a story on quinoa. 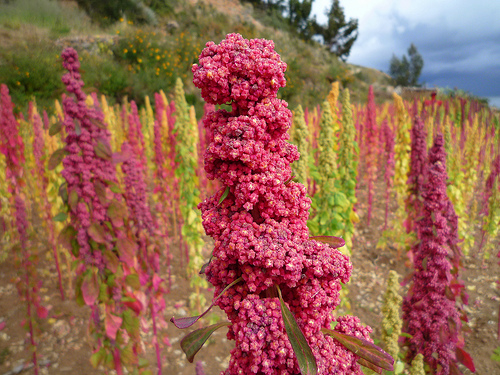 Farmland in Bolivia is being stressed by rising global quinoa demand Credit: twiga269 FEMEN via Flickr.

Bolivia has announced it will convert illegally deforested areas into agricultural land. Specifically, for illegally-logged areas larger than 50 hectares, the new agricultural tenants must only reforest 10% of it. Critics say the new law essentially pardons the illegal logging that has been happening since 1996 and that the government is granting a concession to agricultural interest in Bolivia’s Santa Cruz department.

Multinationals Shell and BASF have offered $26 million to former workers allegedly sickened from working at a pesticide plant in the Brazilian state of Sao Paolo. The companies have offered to pay for the lifelong health plans of 884 workers, according to a rough calculation means $22,500 each. The workers were said to have come in contact with aldrin, endrin and dieldrin–organic pollutants linked to cancer and nervous system damage.

29% of people in Sao Paolo suffer from obesity, according to a new study from the University of Sao Paolo and city’s Heart Institute (Incor). Health officials point out that Sao Paolo’s poor eating habits and a sedentary lifestyle are to blame. Brazil’s Healthy Plate program aims to reduce obesity and improve nutrition. The program hopes to reach the entire population before the World Cup starts in 2014.

In Brazil, the birth of a giant armadillo has been recorded for the first time.

Tayrona Park, Colombia’s emblematic national park on the Caribbean coast, is becoming more difficult to build on now that prior consultation ensures the indigenous community has a voice regarding development, mining and oil exploration. Colombia’s constitutional court has ruled that the indigenous territory extends throughout Tayrona National Park. The court estimates that 34 indigenous tribes are at risk of extinction and that 69 others are affected by oil and mining activity.

Ecuadorian scientists are returning home from the Maldonado base on the South Shetland Islands off Antarctica. The researchers are working on a variety of themes including climate change, sea level rise and its effect on South America, pharmaceutical and biotechnology research.