Argentina is expanding its agricultural frontier at the expense of native vegetation in semiarid regions like the Cuyo and the Northwest. A group of scientists from the National University of San Luis studied these changes and determined the rise of the water table (with the rising risk of increased salinity) and the appearance of new waterways. The next step is to enact remedial measures such as soil management and alternative production systems. 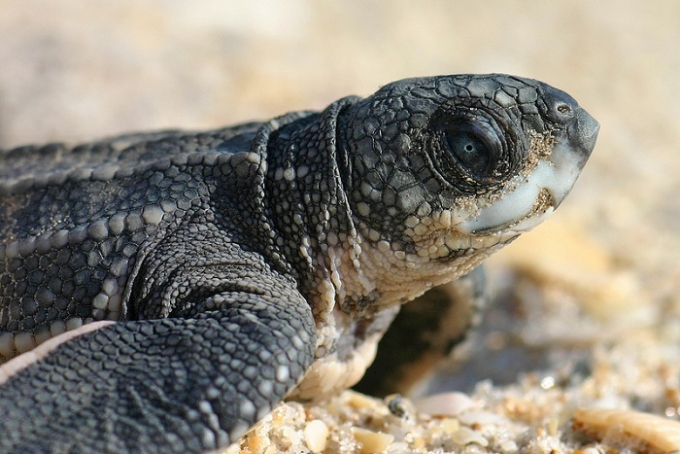 Leatherback turtle numbers have rebounded ‘spectacularly’ on a beach in Trinidad. Credit: Florida USFWS via Flickr.

Biotech company MamaGrande has teamed up with the municipality of Totoras (in the province of Santa Fe) to transform sewage into nutrients and cultivating duckweed (Lemna minor), a species that accumulates starch and can be processed into fuels, plastics and food for livestock.

Brazilian researchers discovered two new species of schizomids, small cave-dwelling arachnids. The results have been published in the journal PLoS ONE. The specimens belong to the genus Rowlandius, better known as short-tailed whip scorpions. Little of them is known.

Ornithologists in the Brazilian Amazon have made the greatest discovery of bird species in recent times. They found fifteen new species of the orders Piciformes and Passeriformes, which were first described by the University of Sao Paulo. A larger study will be released in a special edition of “Handbook of the Birds of the World” published by Lynx in July.

Chile’s government has fined mining company Barrick Gold US$16 million, citing severe environmental violations. Barrick’s Pascua-Lama mine on the border of Argentina and Chile has faced a series of delays and pushback from politicians and environmentalists alike. The Diaguita indians are now talking about contamination stemming from preliminary construction of the mine which has released arsenic, aluminum and sulfates into upstream waters.

Colombian scientists examined the fungicidal properties of bacteria on the fungus Rhizoctonia solani that causes the potato disease known as black scab. The study found that the bacterium was capable of controlling the fungal disease and hopes to use it as a biological control.

Mexican scientists are working on developing a male contraceptive by inhibiting calcium and potassium ion channels required for sperm motility and fertilization.

The number of leatherback turtles have rebounded on a beach in Trinidad. Researchers consider that Grand Riviere beach is the world’s most densely nested site for leatherbacks. More than 500 female turtles nest there each night during the May and June high season.