Brazil will rebuild the scientific base that burned down last year on King George Island in Antarctica. It will cover 4,500 square meters and include 17 laboratories for 64 people.

Researchers at the National University of Salta have developed low-cost solar water heaters for use by indigenous communities in the region. In addition, scientists trained locals how to manufacture the systems.

Veterinarians at the National University of La Plata developed a genetic test to diagnose and detect diseases in older pets. 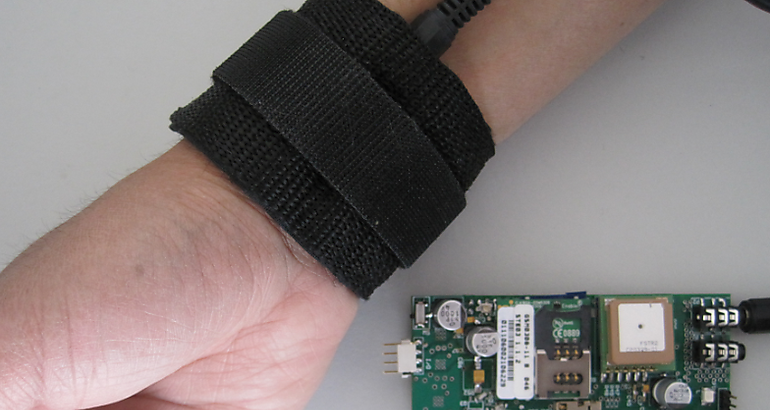 Mexican researchers are working on developing a bracelet that can detect cardiac arrhythmias, abnormal temperatures, displacements and falls in geriatric patients. Credit: VACS/UNAM.

The Brazilian government is incentivizing companies with grants of up to US$900,000 to promote the training of scientists.

A group of Colombian and Argentine researchers discovered a new species of frog dubbed Hyloscirtus antioquia because it only lives in the region of Antioquia in Colombia. The species was unveiled earlier this month in the journal Herpetologica.

Work at the National University of Palmira shows that the addition of vegetable fats to the diet of high-producing dairy cows helps maintain good body condition in the postnatal critical period where body reserves are depleted.

Two Colombian scientists developed one of the 20 most-downloaded apps in the App Store. Tareasplus.com is a leading Latin American education platform.

Colombian company Tashi has developed “smart” clothing fabrics made in Brazil. Some of the fabrics have UV coating to protect the skin from sunlight. Others keep the person hydrated and another harbors antibacterial compounds.

The Osa Peninsula in Costa Rica holds 2.5% of the world’s biodiversity. Recently, a group of scientists discovered two new species there–one a leguminous plant with large round leaves called Schnella bahiachalensis and the second an insect Callionima nomius, the butterfly of which was described in 1856 but whose larvae had never found.

The Dominican Republic’s Institute for Innovation in Biotechnology and Industry is driving the development of alternative flours to produce food staples at lower costs. The crops they’re looking at are banana, yam, sweet potato and edible cactus.

UNAM researchers are working on developing a bracelet that can detect cardiac arrhythmias, abnormal temperatures, displacements and falls in geriatric patients.

High school students from the National Polytechnic Institute developed a bionic hand prototype. The prototype performs rudimentary movements and can hold and use tools such as hammers and screwdrivers.

The Uruguayan government has introduced the Biotechnology Act to develop Uruguay’s science sector. The draft was prepared by the Biotechnology Sector Council three years ago as a tool for the articulation, formulation and implementation of sectoral policy work.

The Biotechnology Program for Latin America and the Caribbean (BIOLAC) of the United Nations University (UNU) based in Caracas celebrated its 25th anniversary with several advances in research and development. The most striking is a cheap diagnostic kit for syphilis developed by scientists in Uruguay and Paraguay. The UNU / BIOLAC also funded the genome sequencing of the Tannat grape in Uruguay.