To what do you attribute your “failures” in trying to improve your malaria vaccine?

“I do not care about failing as long as I learn through it.”

I do not care about failing as long as I learn through it. The malaria problem is very complex. From each hiccup something is learned that even if though it may not seem it, you are advancing in improving the vaccine.

How much does the vaccine cost to produce?

The vaccine costs only US$0.10 to produce but those who intend to distribute it sell it for US$150. They defend themselves by saying that the systems of production and marketing are different. Biological vaccines are those that tend to degrade, chemical [or synthetic] vaccines do not degrade. They don”t require cold chains. Aspirin, of which we”ve known since 1932, is an active synthetic substance that is extremely stable.

Why has the World Health Organization not taken full advantage of the vaccine patent you donated them in 1994?

There influenced by the interests of large multinationals and unfortunately since then there hasn”t been a vaccine against malaria. None has achieved the efficacy of the first vaccine we developed.

The 2009 Cochrane review concluded that your vaccine was not effective in Asia or Africa. How do you comment?

The problem is that many factors that have nothing to do with each other were combined. It is like mixing pears with beans, peaches, zapotes. So it is not possible to have a reliable result for the effectiveness of the “SPf66” vaccine. In that report, the results from South America, Africa, Asia were mixed, as were different age and ethnic groups.

We haven”t stopped looking for new ways to improve the effectiveness of the vaccine that initially protected approximately 30% of patients and was composed of only four fragments of different parasite proteins. The vaccine now is composed of 48.

“We have been accused of trafficking monkeys, a situation that is fortunately resolving itself.”

Your “SPf66” vaccine has worked to some extent in Latin America. Why?

In Colombia we had successful protection of 38.9%, being more effective in children 1 to 5 years old where we reported the protection reaching 77%. In Venezuela, in people 10 years and up, it was 55%, among other results. The African studies were not successful because they were vaccinating very young children which makes the results unreliable.

Why was there little vaccine efficacy in infants?

In Latin America people are vaccinated from the age of one year on because the immune system is not well developed until age and why many vaccines are given to children between 9 months and 1 year old. The problem in Mozambique and Tanzania is that vaccines were given to newborns behind my back and we did not get the proper results.

What does the future hold for combating infectious diseases? Biological or synthetic?

“The problem is a war of interests”

The problem is a war of interests. There is great opposition to my studies. In my country they have not given me support because it has already invested heavily in other systems.

In a chemical vaccine the chemical is the only thing present, while the problem with biological vaccines are the contaminants that can have adverse effects. That is not the case with chemical vaccines. [For synthetic vaccines] there”s great stability and low production cost.

Why did you become a medical researcher?

I have always been a lover of chemistry. My great hero is Louis Pasteur who was a chemist, not a physician. I went the medical route because I remember seeing photos and pictures of Pasteur, a chemist, looking as Roux–one of his aides–vaccinating while he was unable to touch anyone because he was a chemist. I said I”ll be doctor so I will be able to vaccinate but I am going to major in chemistry because with chemistry one can make the molecules.

What do you think about the return to the past of using whole organisms, Pasteur-style?

They”re being used by the U.S. Navy. The very interesting research led by Stephen Hoffman, with the full support of the Navy, is looking to take the parasite, not irradiate it (which is something that has been done since 1964), and administer 135,000 parasites intravenously. In this research, what is sought is to protect soldiers while they are at risk, which implies a very different philosophy that our investigation is using.

The parasite has many defense mechanisms and we have to close the door on each. If you are inoculating with active parasites, applying different numbers of parasites in different groups, all that happens is that it takes more time to develop the disease, but eventually (in the order of 4 days) no matter the number of parasites you”ve inoculated with, patients present the disease. That is why we are dedicated to finding a vaccine that is not just 90 or 95% effective but 100% effective.

In your estimation, what are the social and economic benefits of using vaccines?

According to the WHO, the number of deaths resulting from communicable diseases that could be controlled by vaccines is almost 17,000,000 per year. 17! You know what that is? It”s almost killing the entire population of Mexico City every year, and returning the next year and killing them again. Economically, I don”t even have to say it, the benefits are incalculable.

What are your plans for the future?

“Imagine, no institute, no money and no monkeys, that means we are doing things right.”

I want to release the next vaccine as soon as possible, but I”ve been presented with many difficulties as the institute where we work was seized by a Spanish bank after the San Juan de Dios Hospital went bankrupt. We had to reassemble the lab after having lost nearly forty million dollars. Also, a minister of health removed our entire government budget. Finally, a group of environmentalists have accused us of trafficking monkeys, a situation that is fortunately resolving itself. Imagine, no institute, no money and no monkeys, that means we are doing things right.

Thanks Dr. Patarroyo. Maybe we”ll see you at the Nobel ceremony!

That does not worry me, the principle prize that I can receive is to to resolve these problems and save lives and that”s priceless, period. 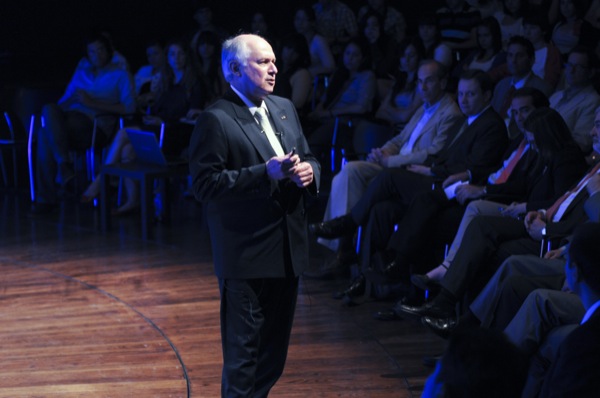