The explosive spread of Zika throughout the Americas is raising questions about the best ways to control this and future epidemics. We first need to identify what factors contribute to the spread of Zika and understand where and when they occur. With that knowledge we can effectively target our resources to fight the disease and control its spread.

The Zika virus is transmitted by the mosquito Aedes aegypti. This mosquito’s ability to survive and its potential to transmit viruses are highly dependent on environmental conditions, especially weather and local cultural practices.

Variables such as temperature, rainfall, vegetation, land cover and land use all affect the number of mosquitoes present and their ability to transmit viruses. Today, these variables can be measured from remote sensors on satellites, planes and unmanned aerial vehicles. We can then estimate the likelihood of mosquito presence and disease transmission.

Data captured via satellite and aerial methods – which in the scientific community is called remote sensing – is less accurate compared with data collected on the ground, which is usually from people taking measurements and automatic monitoring devices in place. However, in many places it is not practical or there are insufficient resources to generate useful in situ data. That leaves remote sensing data as the best or only option available. It also allows scientists to cover large geographical areas for long periods of time at a very low cost and from the convenience of an office. 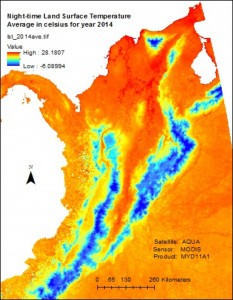 Monitoring environmental conditions such as temperature and rainfall that foster populations of disease-carrying mosquitoes is critical to prevent or slow outbreaks. The current Zika outbreak has already spread throughout tropical areas of the Americas from Brazil to Mexico.

Through monitoring it is possible to identify in advance places where mosquitoes might thrive. Fluctuations in rainfall and temperature are strongly dependent on the sea surface temperatures over the tropical eastern Pacific Ocean, better known as the El Niño oscillation – meteorological conditions that can be monitored by satellite.

The same mosquito that carries dengue, Aedes aegypti, also carries Zika, as well as yellow fever and chikungunya. In light of the severe conditions of the current El Niño, the timing of this Zika outbreak is likely no coincidence.

Mosquito breeding in both wet and dry areas

The relationship between El Niño and Zika seems less direct upon initial examination of the different rainfall trends in the affected areas. There is above-average rainfall in some areas, such as Ecuador, but below-average rainfall in others, such as my hometown of Cartagena, Colombia, where the outbreak is reaching alarming levels.

It seems logical to suspect that higher rainfall would fill more containers with rainwater, providing more breeding sites for mosquitoes. But why is Zika spreading in places with below-average rainfall during El Niño events?

One reason has to do with the environments this mosquito prefers, which are typically in and around human residences and the clean-water breeding sites they provide, such as flower pots, tires and water storage tanks.

Indeed, in some areas, people tend to use water tanks more during dry periods. Unable to rely on fresh or frequent rainfall or municipal water supplies, they store what rain does fall or sporadic city water supplies for domestic use later. That makes mosquito breeding sites more abundant, even in the absence of rain.

In locations with frequent rainfall, there may actually be less transmission of disease because the rain can cause storage containers to overflow before mosquito pupae hatch. Conversely, dry periods allow longer water retention times for mosquito life cycles to be completed.

Storage tanks are more common in areas that lack a constant supply of municipal running-water system. That can indicate lower neighborhood socioeconomic status, which in turn can signal other community characteristics, such as the absence of air conditioning (meaning higher indoor temperatures) and the presence of open windows (which allow more in-and-out access for mosquitoes).

Those community characteristics can be inferred through monitoring land cover and land use with satellite and aerial imagery. Satellites can also show how urbanized the landscape is, suggesting the likelihood of mosquito breeding sites. Higher-resolution images can show the presence of favored breeding locations, such as water tanks and piles of abandoned tires.

How mosquitoes spread in the developed world

For example, steam tunnels, which transport steam through cities for heating, and other subterranean habitats can provide constantly stagnant water at favorable temperatures for vectors, even during winters in northern states. In fact, such cases have already been reported in Washington D.C.

In addition, summers are sufficiently long in northern states of the US to allow completion of the life cycle. Theoretically, if the virus were to be present, that would increase possibility that the mosquito would pick up the virus locally and transmit it to a human. Furthermore, another species of mosquito, Aedes albopictus, can transmit dengue, and can apparently also survive cold winters: it has been detected in Marion County, Indiana, since 1986, a local public health biologist has told me. Ae, albopictus came to the US thanks to the globalization in a shipment of tires from Southeast Asia.

The possibility of having viruses such as dengue or Zika in local mosquitos in northern states such as Indiana is still very small, but the possibility is growing. Increased global travel is an important factor in the disease’s spread. Zika has been reported in the literature since the 1950s in Africa. As travel increased, the virus has reached the Americas – at a time when El Niño is providing favorable conditions for its spread. Also contributing is increasing urbanization, which provides ideal land cover conditions for Ae. Aegypti to thrive and spread the virus.

The current Zika outbreak may be a harbinger of things to come. National Oceanic and Atmospheric Administration data going back to 1950 show a trend of increasing strength of El Niño events.

Scientists also suggest an increasing frequency of El Niño oscillation due to climate change. All this indicates a crucial need to cost-efficiently monitor the environmental conditions that lead to disease outbreaks, and to identify suitable habitats where mosquitoes may breed. Sensors strategically located in space make this monitoring more possible and more effective.

This article was originally published on The Conversation. Read the original article.