Originally published on The Russells.

Postobón is the largest beverage company in Colombia. In addition, they are also major sponsors of sports in Colombia, being the main sponsor of the national soccer league, La Liga Postobón (The Postobón League).  This company is also the distributor of PepsiCo. products such as Pepsi, SevenUp, and Mountain Dew.

Recently, an advertisement portraying the risks of consuming these drinks daily was taken down by the Superintendencia de Industria y Comercio, a Colombian government organization that protects consumers, and Postobón. The commercial, which was meant to educate people who aren’t familiar with the risks of sugar, was partly taken down by a soda company, Postobón, which profits from the consumers that are getting ill. The SIC claimed that the commercial didn’t have scientific evidence backing it and that the unit of measurement used for the purposes of the ad, the teaspoon, wasn’t exact or determinable (Superintendencia De Industria Y Comercio 1).

First of all, the World Health Organization has already made a press release urging people to reduce sugar intake in their diet to prevent “the risk of overweight, obesity and tooth decay” (World Health Organization 1).  Furthermore, a teaspoon is a measurement that people understand, hence, they will get the idea of how much sugar sugary beverages have. Postobón being a good “Big Soda” company of course got scared and made the agency that is there to “protect Colombian consumers” (Superintendencia de Industria y Comercio 1) take down an ad that would do exactly that. The Asociación Educar Consumidores (Association for Educating Consumers), the association that made the commercial, was not informed that the SIC considered the ad dangerous and misinforming, but also did not have the chance to show the scientific evidence backing their claims which the SIC claimed to be inexistent (Redacción Salud 2).

The commercial depicts a person who starts his day by drinking a bottled juice. Then at lunch he has some iced tea. And finally, he has a few sodas at night with dinner. With every drink, the commercial states the amount of sugar, in teaspoons, in each drink. The commercial ends by stating all the risks of having a high-sugar diet such as obesity, diabetes, and heart disease; besides, it invites consumers to rethink what they are drinking. (Watch the commercial here). 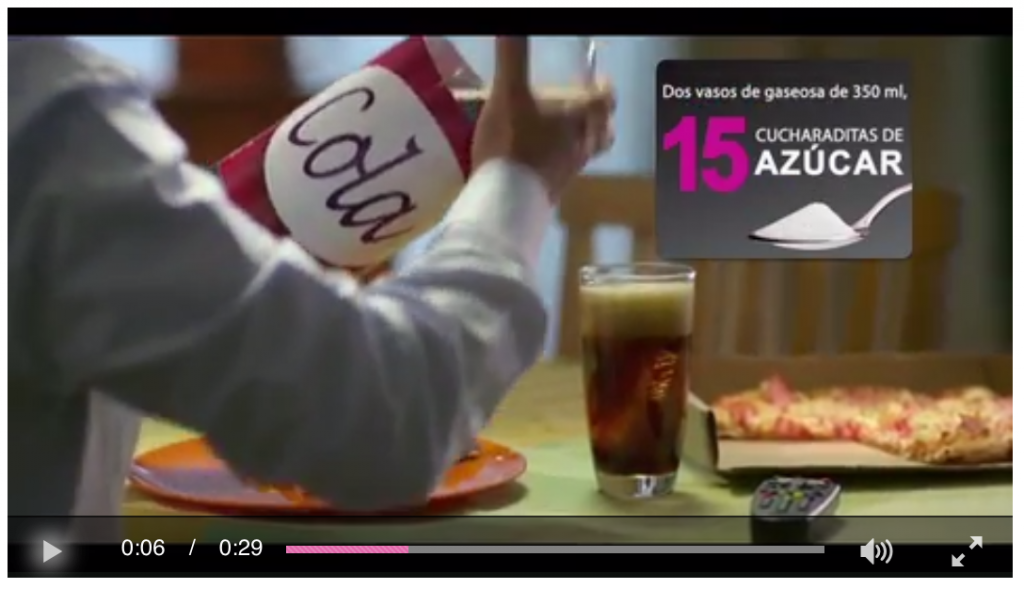 Sugary drinks in Latin America are available practically everywhere. People of all ages consume them daily and most of them are unaware of their consequences. Colombia is one of the countries that has been affected by excess sugar consumption. Around 51 percent of Colombia’s population suffers from obesity (Arango 1). Moreover, according to the International Diabetes Federation (IDF), Colombia is second in Central and South America in number of people with Type 2 diabetes, with 2.1 million people suffering the disease (Garrido 2).

The SIC is blatantly ignoring the health of the people of Colombia in regards to sugar consumption. Advertisements like the one that has been taken down should be there in order for people to know what they are really drinking. Giving the consumer a chance to be informed is what organizations like the SIC should do, even more when it is about such pressing topics as sugary drinks. The Colombian consumer has to be informed of what he is doing to his body with his diet. Let’s hope that in a not-so-distant future, Big Soda doesn’t tell us what is healthy and what is not.