For every pound of cacao beans — the part of the plant that ends up in your chocolate bar — farmers produce about 12 times as much biomass. Now, researchers in Colombia have created new products from this “waste” material, including beer, juice, desserts similar to pudding and also nutraceuticals.

Cristian Blanco-Tirado, a chemistry professor at the Industrial University of Santander in Bucaramanga, Colombia, leads the Nextcoa project, which has developed these products. Nextcoa also uses cacao beans and waste to produce 100 percent cacao chocolates that are less bitter than traditional all-cacao products.

Instead of using the cane sugar, milk and soy lecithin found in a typical chocolate bar, Blanco-Tirado says that the product uses sweeteners and emulsifiers derived from the cacao fruit, which used to be thrown away after the cacao beans were extracted and exported. Blanco-Tirado says he expects “Betul” brand chocolate to be commercially available in August 2019. 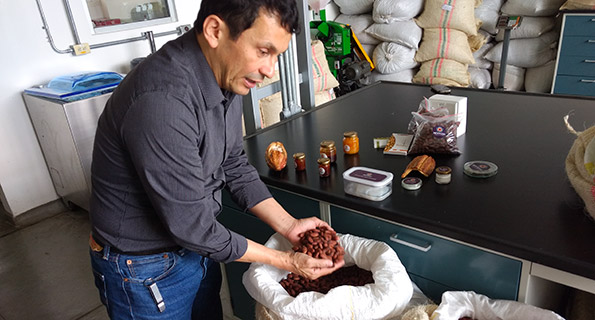 “Our Santander region in Colombia has traditionally been a producer of cacao beans, but only 6% of the revenues go to producers,” he says. “So we asked if it was possible to take better advantage of the cacao fruit by developing technology for the production, not only of beans, but of products with greater value.”

Blanco-Tirado says the biggest challenge is helping smallholder farmers understand the benefits of commercializing the waste, while also making the process financially viable and attracting investment.

For now, the team’s financial analysis says the price of the chocolate is competitive with luxury 70 percent cacao chocolate brands. Blanco-Tirado added that other products are being produced from cacao pods as well, including cellulose, juice and syrup.

This is an excerpt of a larger story published on Ensia.com.