On the eve of Brazil hosting three days of environmental awareness and global strategizing, hundreds of demonstrators gathered along the Xingu river in the Amazonian north to protest the US$16 billion Belo Monte hydroelectric project, slated to open in 2015 and ramp up to full capacity by 2019. Charles Lyons has an informative video on YaleE360 about the “social tensions that accompany development” of the project. With the flooding of 260 square miles of rainforest, 20,000 people—mostly indigenous—will be displaced, says Lyons. Communities downstream will see fish stocks depleted, while environmentalists worry about biodiversity plummeting in the region, reports Aljazeera.

Land reform in the rainforest is getting bloody. Though President Dilma Rousseff vetoed several controversial ammendments to Brazil’s new forest code, the battle between landowners and activists (including indigenous communites) is becoming increasingly fatal. Fifty-one indians were killed in Brazil in 2011, cites NYTimes’ Simon Romero.

Brazil, Peru, Colombia and the Philippines topped the Global Witness list for countries where the most environmental activists—campaigners, community leaders and journalists—were killed between 2002 and 2011 (at a rate of 1 a week).

Meanwhile, a lawsuit against agrigiant Monsanto for demanding payment for the illegal use of their Roundup Ready GM soya beans may be thrown out and cost the company billions of dollars in royalties. Brazil farms 30.3 million hectares of GM crops—an area about the size of Arizona—and most of this is soya. Luisa Massarani at Nature News has great coverage.

Cordoba is seeing a lawsuit materialize after more than a decade of protests against soya cropdusting and its damaging effects on the areas in and around Argentina’s second largest city. Two farmers and a pilot are accused of fumigating crops too close to urban areas, using the pesticides endosulfan and glyphosate (once the active ingredient in Monsanto’s Roundup). In 2008, the Cordoba government prohibited aerial fumigation of soya fields near the city. But a recent study of an urban neighborhood in Cordoba found pesticides in the blood of 114 of the 142 children sampled. 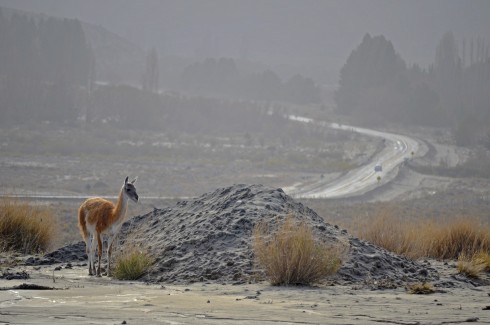 The Universidad de Rio Negro in Argentina is currently sponsoring 24 projects to study the effects of last June’s Puyehue-Cordon Caulle eruption on Argentina. Dubbed PROEVO (Programa Cientifico Tecnologico de Apoyo a la Emergencia), the group of scientific studies will look at the effects of ash on the western honeybee (Apis mellifera), the effects of mercury and other heavy metal levels in lake fish and the eruption’s lasting effect on Bariloche’s tourism sector, among other projects. More information here.

A team of Argentine and Brazilian scientists have succeeded in creating molecules that existed at the birth of the universe. H3+ and HCS+ ions were made using a cyclical particle accelerator called a synchrotron located in Brazil. The work was published in the Journal of Physical Chemistry. Brazil’s new SIRIUS synchotron is slated to open in 2016.

This month marks the one year anniversary of the Puyehue-Cordon Caulle volcanic eruption in southern Chile. The eruption sent a pyroclastic cloud 14 kilometers into the air and 3,500 Chileans were evacuated from the vicinity. The effects of the volcanic ash have persisted for more than a year in regions more than 130 kilometers away. My piece on the volcano’s effects on Argentina here.

Researchers at the University of Chile are looking at the effect of zinc on individuals suffering from type 2 diabetes. Manuel Ruz, who is leading the study, is betting that zinc therapy will reduce oxidative stress and inflammation in the beta cells of the pancreas which are responsible for storing and releasing insulin.

Uruguay and Argentina have agreed on a 3-month moratorium on fishing hake (known locally as merluza), starting July 1. According to Guillermo Cañete with Argentina’s Fundacion Vida Silvestre, the fishery is currently being sustained by juveniles. He suggests a 1-2 year moratorium on fishing so these may mature. Whereas a juvenile female will lay 500,000 eggs, a 6-yr-old adult female will lay 5 million, the biologist stated.