We decided to look at the archive of the Whitley Awards, also known as the “green Oscars,” to see how often Latin American scientists and conservationists have been highlighted. Below, some takeaways from the data:

Argentina, Brazil and Colombia rank in the top-5 most awarded countries. Latin American and Caribbean countries make up 11 of the top-20 most awarded. 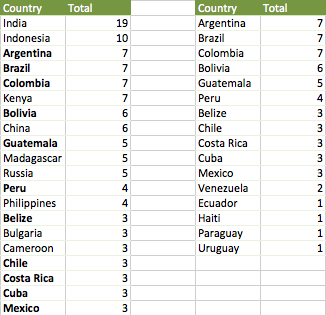 Latin American conservationists saw a surge of awards about 10 years ago, with a spike of 10 in 2007.

2005 saw the most Latin American countries represented at the Whitley Awards with Mexico, Guatemala, Costa Rica, Colombia, Chile, Belize and Argentina being recognized.

Conservation work in Latin American and Caribbean countries accounts for roughly one-third of the awards given out, scooping up 57 out of a total of 176 awards.