Argentine astronomers are trying to explain the lack of dwarf galaxies in the universe. Though astronomical theory predicts the existence of thousands of dwarf galaxies–galaxies with a few billion stars compared with the Milky Way which has 200 to 400 billion–only a few dozen have been discovered. Astronomers in Cordoba have proposed the following explanation: these dwarf galaxies traveled through a high-density area in which they lost the gas needed to form stars and thus became dwarf galaxies. 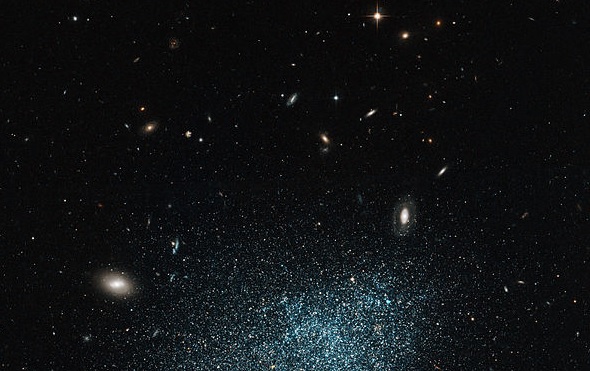 Argentine astronomers have come up with a theory for why so many dwarf galaxies remain undiscovered. Credit: ESA/Hubble & NASA via Wikipedia.

A team of researchers from the University of Buenos Aires is studying arsenic content in soil and irrigation water in soybean cultivation, which covers over 20 million hectares in Argentina. They found that arsenic affects crop growth but does not accumulate in grains. “One strange result we found was that although high levels of arsenic negatively affect the plant, at the same time they confer drought tolerance,” said Raúl Lavado, director of the Agricultural and Environmental Biosciences department at UBA.

Bolivian corn and cotton interests say that to improve cost and productivity levels, Bolivia should approve transgenics. Santa Cruz growers met with government representatives, stating that with GM technology, the agricultural sector could produce up to 45 million tons of grain and create a million jobs.

Scientists from the National University of Colombia are trying to identify genes that may help create more effective and less toxic treatment for leishmaniasis, a disease caused by a protozoan and transmitted by the bite of mosquitoes that affects about a million people worldwide. Analyzing how certain genes are activated in relation to the parasite could identify those that would be useful for the development of more effective treatments.

Colombian researchers develop a gel from bee venom to combat rheumatism and arthritis.

UNAM has developed a new packaging system for edible fruits, vegetables and food products with little processing. They are extracted from plants used in Mexican cuisine which also boast antifungal properties.

Peru is planning a solar project to provide power for 2 million of its poorest.

El Salvador’s government has complied with its 2011 commitment to UNESCO to declare Cerro El Pital a protected biosphere area. It shares the region with Honduras and Guatemala. The Salvadoran protected area covers 310 hectares and so far 12 owners have met the requirements.