A study performed by the University Hospital of Mendoza has yielded alarming results about childhood obesity. Almost 40% of children between 5 and 12 years of age in that province are either overweight (19.9%) or obese (19.1%). Poor nutrition and little or no physical activity were listed as causes. The study will continue to cover 2,400 primary school children in the province that lies in the foothills of the Andes. 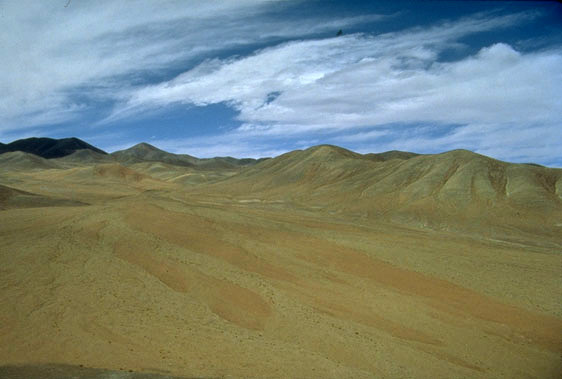 A NASA prototype robot is being tested in Chile’s Atacama desert. Credit: Wikipedia.

Mastitis causes about 10% of losses in Argentine dairy systems–more than 11 million liters per year. The disease, caused by the bacterium Staphylococcus aureus, is usually controlled with antibiotics and good herd management practices that include pre-and post-milking disinfection. Because these methods are sometimes insufficient, the National University of Rio Cuarto has developed a treatment that includes administering a probiotic with a number of beneficial microorganisms that attack the pathogen causing the disease. This has already been tested successfully in animals. Another treatment involves a vaccine with an attenuated pathogenic bacteria, which is about to be tested in commercial herds.

Type 2 diabetes affects approximately 6% of Argentines. Scientists at the Universidad Nacional del Litoral have studied patients’ blood and associated certain parameters to the appearance of lesions on the skin, retina and blood vessels of diabetic patients.

Brazil and Argentina have been ranked as the Latin American countries with scientific publications of the highest quality. The latest world rankings developed by SCImago (which analyzes the quantity and quality of scientific publications) placed the University of Sao Paulo at number 11 with more than 44,000 publications and at number 95 the Argentine National Council of Scientific Research (CONICET) with approximately 20,000. As for the quality of publications, more than half of CONICET’s articles were published in premiere journals, while only 38% of the University of San Pablo’s fall under the same category.

The book “Brilliant Minds” was recently presented about the state of Chilean science. One of the main objectives of the text is to encourage early scientific vocations through describing the motivations and achievements of these outstanding scientists.

Scientists at Carnegie Mellon University and the Chile’s North Catholic University have been testing a NASA robot prototype in the Atacama Desert at an altitude of 2,300 meters. The prototype is of a robot NASA plans to send to Mars in 2020. The Atacama desert was chosen as a test site due to its similarity with conditions on Mars.

Colombia is one of the most biodiverse countries in the world, though it is currently expanding its agricultural frontier. The government believes that biotechnology is a powerful tool to achieve energy, food and medications production and has therefore launched a program to help small and medium enterprises to incorporate biotechnology in the agriculture sector.

Scientists at Mexico’s UNAM have developed a three-dimensional mathematical equation with applications that allow medical and geological measurements. The equation measures the compactness of objects or bodies and allows them to be subject to analysis. In medicine, for example, what can be measured is how compact a tumor is or how much it has spread. On the geological side, volcanic systems have been studied.

Biotechnology engineering students at the Technological Institute of Monterrey have designed a bioreactor for the production of blood clotting factor VIII isolated from hamster cells. The researchers calculated that a 500 liter bioreactor working 300 days a year could cover the needs of the hemophiliac Mexican population and lower the costs of treatment. The next step is the transfer of technology to pharmaceutical companies.