Ecuador contributes around 0.1% of the globe’s greenhouse gases but the effects of climate change are evident throughout the country, especially around sources of water.

Between 1996 and 2008, for example, Ecuador’s glacier coverage went down by 28%. Cotopaxi, one of the most active volcanoes in the world—and one of the main sources of water for the Ecuadorian capital of Quito—saw a 30% reduction in glacier coverage between 1976 and 1997.

Empresa Eléctrica Quito, in turn, confirmed that the amount of water available to the capital was reduced by 50% between 1978 and 2008. Between 2050 and 2100 we expect glaciers to retreat at least 55% in the Andes in tandem with an increase in temperature between 2 and 8°C in the Amazon region.

This year, a study by the University of Hawaii published in the journal Nature suggests that within a decade the world’s tropical regions—located between 23.5 degrees north and south—will be the first to overcome historical temperature maximums.

Ecuador recognizes its vulnerability. Through the Secretariat for Climate Change of the Ministry of Environment, the country has developed a systemic and integrated focus on the relationship between climate change and economics to propose solutions in the short, medium and long term.

Latin America teams up with Europe

Ecuador participated at the Agriculture, Forestry and Land Use table (AFOLU) and presented the regulatory framework governing Ecuador’s climate change programs and relevant initiatives that are being implemented at a national level:

The main result was to hold bilateral meetings with donors and potential donors interested in funding AFOLU issues. It is expected that a dialogue will form in the medium and long term to define a roadmap to facilitate the channeling of funds to relevant programs in the country.

In the long run, the current model of development in Ecuador focuses on three principles: environmental stewardship, energy efficiency and sovereignty.

Before 2030, Ecuador plans to diversify its energy grid and develop a robust economy centered on efficiency and value of their natural resources. Since 2007, the Ecuadorian GDP has been growing and is expected for 2013 to grow between 4 and 5%. Furthermore, energy demand is increasing in Ecuador, which means it has committed significant investment in energy diversification—particularly in the development of non-conventional renewable energy sources: geothermal, wind, solar and biomass.

In the past five years, Ecuador has invested US$4.2 billion in energy projects to double power generation capacity, with an eye to achieving at least 90% from renewable sources by 2016. Ecuador currently produces 300 MW of clean energy. 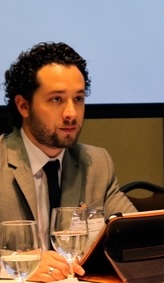 Impressions as an Ecuadorian and as a citizen of South America regarding efforts to combat and cope with climate change:

1. Where are we going with the efforts in which you collaborate? What are the aims?

The events organized by EUROCLIMA are opportunities to foster political dialogue on climate change at the inter-regional level, to improve the exchange of scientific and socioeconomic information, and more importantly, to take advantage of synergies between the actions of Ecuador with inter-regional programs. We’re hopeful that these efforts primarily aim at promoting cooperation, technology transfer, financing and capacity building in the areas of mitigation and adaptation between the EU and Ecuador. It’s important to note that the EU is comprised of Annex II countries, that is, they are required to provide financing and technology transfer.

2. What are the priorities?

1. Encourage the channeling of financial resources to give continuity to national mitigation and adaptation. In regard to mitigation, for example, Ecuador is preparing to implement REDD+ projects and develops methodologies for NAMA‘s execution. With respect to adaptation, Ecuador is preparing for comprehensive management of water resources, food security and adaptation to the retreat of glaciers and alpine areas.

By 2017, Ecuador hopes to generate 6% of electricity from non-hydroelectric renewable sources and 93% from hydroelectric.

2. Channeling aid to strengthen endogenous capacity, generating proprietary technologies that can rescue ancestral knowledge. This point emphasizes adaptation programs, as it’s in the country’s interest to have communities strengthen their own capacities to adapt to climate change and to avoid, if possible, relying on imports of technology as usually happens.

3. Considering the great biodiversity of tropical countries, including Ecuador, under what parameters will we measure the success of these efforts?

Biodiversity, being a subject directly related to ecosystems and natural resource management, has been considered a fundamental criterion in the formulation of policies, action plans and local projects. In this regard, the Ministry of the Environment aims at an integrated management of the landscape in which we seek to promote measures to exploit natural resources while protecting ecosystems. One of the main goals is to reduce deforestation and promote environmental restoration measures.

The success of these efforts will be reflected in a reduction in the rate of deforestation, an increase in the area of protected ecosystems and reforested areas, and greater involvement of local communities. One of the main focus areas are watersheds that have been categorized as strategically important due to their relevance in providing water for power generation, irrigation, and human consumption.

4. What about mechanisms to confront the negative effects of climate change on Ecuador’s biodiversity? How do you choose one and not another?

Several projects and programs exist that focus on climate change and incorporating ecological criteria and benefits related to the protection of biodiversity. First, there is a major effort to gather information and execute studies to help better understand the socio-ecological interactions, the benefits of ecosystem services, and the ways to improve the resilience of agroecological landscapes.

A mechanism directly linked to the issue of biodiversity is the National REDD+ Program that will operate starting in 2014. The mechanism seeks to reduce emissions from the AFOLU sector while protecting forest ecosystems and generating production alternatives for communities dependent on forest resources. The mechanism will prioritize areas most in need of conservation, by the level of threat they face, or due to the biodiversity they harbor. In this way it hopes to complement national efforts to protect biodiversity and strengthen the national system of protected areas, while driving the adoption of more sustainable agricultural practices and sustainable management of forest resources.

The mechanisms are chosen based on national needs, local capacity and institutions, and the availability of financing for implementation. In many cases these initiatives must be aligned to frameworks governed by the jurisdiction of ministries and action plans. In the case of climate change, the most important documents are the Constitution, the National Climate Change Strategy, the National Climate Change Plan and supplemented by presidential decrees and ministerial decisions.

5. About energy diversification: What percentages are generated from what sources? What are future goals?

Through the SNI, CONELEC has reported that in 2011 Ecuador’s electricity generation was from following sources:

As of 2011, the regulations 004/11 and 01/13 of CONELEC encouraged renewable energy generation through a preferential remuneration which looked, before 2017 to generate 6% of electricity from non-hydroelectric renewable sources and 93% from hydroelectric.

6. Will there be investment from other countries in Ecuador’s energy infrastructure?

Photos: Cotopaxi and Yasuni by Sara y Tzunki via Flickr.