Imagine you found your dream job; you have all the qualifications, you have prepared for this opportunity all your life and it is finally here, knocking at your door. You get the call from the hiring manager to give you the good news, you have been selected, they are excited for what you have to contribute to the company and you can start as soon as possible. “There is only one thing”, the hiring manager says, “We would suggest you dress up a little bit more ‘formal’ when you have to interact with clients”. By “formal” he means, you have to renounce your cultural heritage because you belong to an indigenous group in Ecuador and your look is too ‘ethnic’ for business.

This is a reality in many countries in Latin America, even in those that, like Ecuador, have a constitution that recognizes the nation as pluricultural and multiethnic.  These are countries that have the potential to obtain economic growth through scientific discoveries that utilize the traditional knowledge of indigenous groups, and yet struggle to respect and accept their rich indigenous heritage. In a global society that highly values scientific advancement, what is the role that scientists play in developing a technology-based economic model in multicultural nations like those in Latin America? 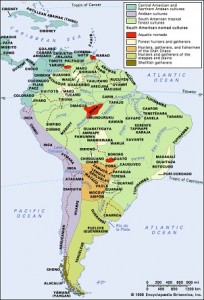 Since the arrival of colonizers to America, the wealth of traditional knowledge has been recognized but not credited.1 The condescending attitude from “conquerors” has permeated through centuries in the Americas and has transformed the way nations see themselves, and only in recent years have indigenous peoples reclaimed their rightful place in history. For example, efforts to preserve indigenous cultures in Ecuador have transformed school curricula with the incorporation of native languages for the tsachilas, chichi, and kichwas. However, bilingual education is only available in elementary and middle school, so indigenous children are forced to continue through high school and college in institutions unprepared to adequately serve a diversity of cultures due to the lack of culturally contextualized curricula.2 And though some effort to preserve indigenous culture is better than none, there is much that still needs to be addressed for a satisfactory integration of the indigenous cultures in their home countries.

Traditional knowledge, i.e., the use of plants or animals for medicine, has been documented extensively but has been considered in the minds of outsiders as a static entity awaiting discovery. Traditional knowledge is in reality highly diverse and place specific, which denote its dynamic nature.3  Even though there is abundant information on specific communities, the information that exists for many groups is to a great extent fragmented and the quality of information about biodiversity is poorly understood. 4  In contrast to the relative wealth of research about traditional knowledge itself, the mechanisms used for the cultural transmission of such knowledge are actually under-documented.4  Several factors may influence the transmission of knowledge, including age, gender, the community itself, kinship, market integration, and so forth, although the degree to which each factor affects the transmission of knowledge varies.

For the most part, traditional knowledge in indigenous communities is first acquired within the family circle during childhood, and then transformed due to interactions in adulthood. In general, the community as a group has greater knowledge of species richness than individual experts. However, the role of experts in the community is multifaceted and their disappearance in the next decades could lead to transformations in the patterns of knowledge transmission.3 The relationship between the knowledge itself and the means of transmission, distribution, and preservation is evident; one cannot exist without the other. Nevertheless, multiethnic societies still do not know the cultures within their borders; i.e., almost half of the ethnic groups in Colombia, Ecuador, Peru, and Bolivia are unrepresented in anthropological studies.4 If efforts to preserve and utilize traditional knowledge ignore the many factors of the culture-nature relationship, they are bound to fail. Societies have to recognize indigenous communities as active subjects in the process of sustaining their culture and facilitate adequate resources to their survival.

How do you integrate indigenous cultures into their home countries?

Indigenous communities who interact with outsiders best illustrate the dynamic nature of their knowledge. For example, basic health care services such as contraceptives, vaccinations, painkillers, and antibiotics coexist with indigenous healers, midwives and bone setters in several communities.3 The intercultural exchanges that occur in these settings contribute to the wealth of community knowledge as the external knowledge is incorporated to the community culture.5 These interactions diversify the possibilities of finding a cure and optimize access to health. However, depending on the circumstances, one medical system may be more appropriate than the other and knowing when to use one or the other can make the difference between life and death. These medical systems should not be considered mutually exclusive but rather complimentary. The intermedical character of health care in these communities helps us to better understand how to go from a communal body of therapeutic knowledge derived from an insightful culture-nature relationship to the study of traditional knowledge with scientific methods. 5

The application of traditional knowledge in the area of human health has received increased interest in the last years. Therefore, a brief comparison of the approaches used in biomedicine and traditional medicine is necessary. Most diseases are multifactorial: more than one part in the organism is not functioning properly. Biomedicine favors approaches based on molecular pharmacology to develop therapeutic agents and relies on drugs that are highly-specific to known targets. In comparison, traditional pharmacopeias apply concepts of polypharmacology and rely on synergistic interactions of non-specific chemical compounds found in medicinal mixtures that modulate multiple proteins instead of single targets in drug-target interactions. 6 For example, a well-known mixture of plants that demonstrates synergy is Ayahuasca, in which inhibitors of monoamine oxidase-A, i.e., beta-carbolines, present in one plant render tryptamines from another plant orally available by preventing their degradation.7

Ayahuasca is proof that biomedicine and traditional knowledge can coexist.

In Peru, Ayahuasca along with conventional psychology has been successfully incorporated into an alternative detoxification program for cocaine addiction.8 This program is proof that biomedicine and traditional knowledge can coexist.

Both medical systems have their shortcomings. Biomedicine usually relies on combination therapy to attain interactions of specific drugs with the multiple targets affected in the disease state. Side effects of unexpected drug-drug interactions may be in some cases lethal. In comparison, a major bottleneck in traditional medicine is the description of the molecular mechanisms of all bioavailable compounds that can be absorbed into the site of action.6 Both medical systems very often lack adequate guidelines to advance from studies in the laboratory to clinical trials. In this regard, recently developed system-based approaches describe drug action in the context of the whole system (i.e., cell, organ, body) and may help the transition from the laboratory to the clinic.

These approaches have been successfully applied to biomedicine9,10 and traditional Chinese medicine.11,12  For example, network pharmacology explains the pharmacological effect of several weakly active compounds on a network of receptors without the presence of a major player; this multi-target effect may be a predominant synergistic mechanism in botanical drugs.12 Biological networks may be described using mathematical models,10 and these models can elucidate the complexity of combination therapy (from conventional or traditional medicine) because they allow quantifying the drug effect on the body, and therefore, can generate measurable evidence to explain what was previously known only from anecdotal use. These newly emerging methods still need to be further explored and many challenges lay ahead, considering that cellular networks are dynamic.13 It is imperative for nations to invest in research that takes advantage of the combination of traditional knowledge and emerging technologies as part of a comprehensive knowledge-based economic model.

Several factors need to be considered to develop a comprehensive knowledge-based economic model. Local legislation and international agreements must be in place. Academic programs that integrate the old and new technologies need to be established, i.e., applied anthropology, ethnobiology, ethnomedicine, ethnopharmacology, etc. An emphasis on science programs directed by scientists and not business managers is required.  Incentive mechanisms for the industry and the private sector to develop are needed. Strategies to attain effective and flexible access to information that recognize the rights of indigenous communities without resulting in stagnation of scientific development are mandatory. The role of scientists from a broad range of fields is essential and evident. Collaborative and cooperative efforts are fundamental to undertake this epic task.

Multicultural nations may miss out on the formidable opportunity to develop an economic model based on traditional and novel technologies; however, if we fail to realize that the full integration of indigenous peoples into the fabric of our nations is long overdue. The indigenous communities in Latin America persevered through five hundred years of resistance by relying on cooperative efforts to preserve their identities. Our societies must overcome the race issues that quietly dictate our social interactions to be truly worthy of benefiting from the collective work of all the members of our nations. Legislations may protect the indigenous communities in paper but unless this is put into practice we will not come full circle.

3.            Mathez-Stiefel S-L, Vandebroek I. Distribution and transmission of medicinal plant knowledge in the andean highlands: a case study from peru and bolivia. Evidence-based complementary and alternative medicine : eCAM. 2012;2012:959285.